The Pirates rotation at the start of the season.


The Pirates rotation after the trade deadline.
I'll give the Pirates credit, it takes some nerve to change 80% of your rotation in the middle of the season. Thankfully, the Pirates were stocked with AAA pitchers and traded for Ivan Nova to help eat some innings for the younger guys. Nova will likely be gone at the end of the year via free agency, but the Pirates are probably pretty happy with the results from the trade.

About 30 minutes ago Nova just pitched his 4th complete game of his career! Interesting side note is that the catchers for those first 3 were Chris Stewart who is currently with the Pirates.  Francisco Cervelli caught todays game, but also played with Nova during his Yankees tenure. The Pirates like former Yankees. 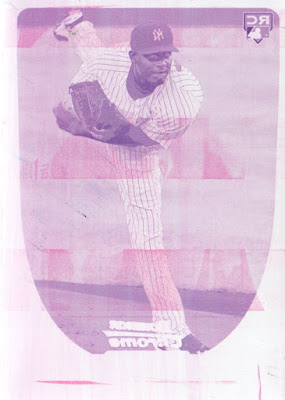 Right after the Pirates traded for Nova I started looking for a card to add.  This plate popped up with a BIN price of $10. That seemed pretty decent so I purchased it.

With the slew of AAA ready arms I don't suspect the Pirates will make a play to keep Nova.  Free agent pitchers are getting crazy amounts of money on the open market. Nova has age on his side so some team might pay to get the 2013 version of Nova. I don't think I would want the Pirates to gamble on that.

Posted by BobWalkthePlank at 10:38 PM