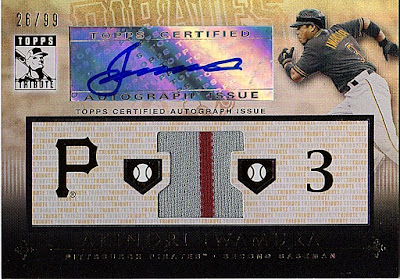 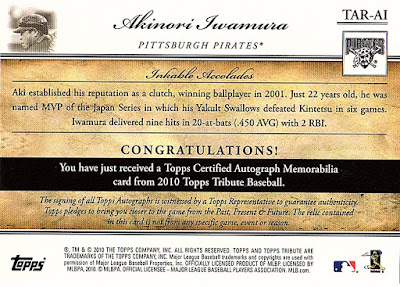 In 2010 the Pirates had finally gotten rid of most of the old guard and were transitioning the team to center around players like Cutch, Pedro Alvarez and Neil Walker. It was an exciting time as the minor leagues were no longer a vast wasteland and the team invested a ton of money towards scouting in the Dominican Republic.

With all the player movement the Pirates had to be creative in finding short term fixes at a few positions. What seemed like a creative solution for the second base position was when the Pirates sent Jesse Chavez to the Rays for Aki Iwamura. Known as a high obp guy and a solid defender, it looked to be a great fit.  It turned out to be a disaster

From day one Iwamura struggled with every facet of the game.  He looked especially lost at the plate.  To make matters worse the Pirates insisted on him batting leadoff even when he was mired in an epic slump. Eventually he was benched, then released in September.  That season proved to be his last.

Card wise he doesn't have much as a Pirate.  Somehow he snuck into a few high end sets.  The above Tribute auto that I recently purchased for $5.  One of those damn cards that cost more to ship than the purchase price.  I also have this Chrome printing plate. 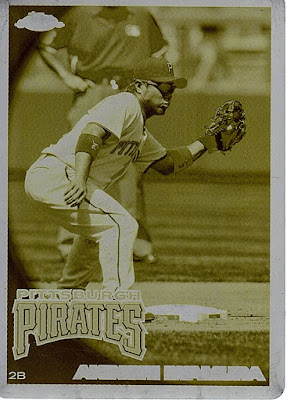 I have a sick fascination finding cards of players that went completely bust for the Pirates.  Iwamura fits the bill perfectly.

Hope everyone enjoys the weekend.

I'm trying to gauge interest in a Summer Secret Santa.  If you are interested sign up here.  Need some more people to make it happen.