Last week I participated in Zippy's all auto team Blog Bat Around by using dual autos. I loved adding these cards over the years because it allowed me to collect non Pirate players I liked by using the Pirate player as justification for the purchase.  The other nice thing was that the Pirate player always drug the price down to a much more manageable amount.  You want a cheap Buster Posey auto, just throw Tony Sanchez on there! There is a Cal Ripken auto that I've been wanting to find for a long time that features former Pirate prospect Don Kelly.  That seems like a nice way to get a Ripken auto.

The golden era for me to add these type of cards was 2005-09.  They seemed to be plentiful and were added to sets that didn't cost $300 a box. Sets like Donruss Elite and Topps Co Signers were fun sets that featured tons of unique combos.

Today these combo Pirate autos just don't get made as much.  When Cutch became a bona fide superstar he stopped signing.  The only dual autos that feature Pirates seem to be prospect oriented. These type of cards tend to be in high end sets.  Time to play the eBay waiting game. 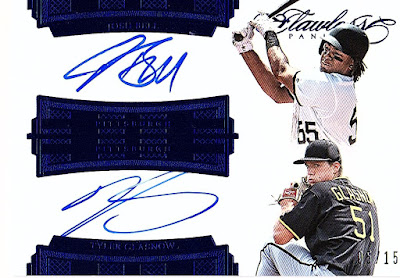 The above card is something I've had my eye on for a while.  I've been adding Glasnow cards at a vigorous pace since his market collapsed.  The issue with this card is that Josh Bell autos continued to sell at a high price.  Finally, between Bell's slow start and auto over saturation his cards have started to drop in value. I won this card for about $20.

Not a bad looking card.