You're Never the Only One

2018 has been one of the weakest in terms of new releases for the Pirates in recent memory.  Had my fingers crossed for Bowman Chrome this year, but even the prospect oriented set only had one Pirate first year auto.  The real gut punch was the checklist for Topps Pro Debut.  I don't often get excited for new releases, but this is the only set that has produced WV Black Bear cards over the first few seasons of the teams existence. Nothing to be found this year.  I guess Heritage Minors has an outside chance to produce a card, but that set tends to focus on the higher levels of the MiLB.

My WVU collection to the rescue.  While I collect all players from alma mater, I consider the core 4 Steve Slaton, Pat White, Joe Alexander and Devin Ebanks.  The first three were all high draft picks and have an absolute shit ton of cards out there.  I literally find a handful of cards a month that I had no idea existed. Ebanks was only featured in a handful of sets so new to me cards don't pop up too much.

Obviously Devin Ebanks is kind of an obscure collecting focus.  He was a second round pick that only saw a little playing time with the Lakers.  When rarer cards pop up I often think to myself that I should get a pretty good deal.....never really the case.  Someone else is always looking.

Last month a seller had two high end lots of Ebanks cards going off on the same day.  I was pumped. I didn't need every card in the bunch, but wanted both lots as it checked off several rare parallels that hardly ever pop up.  To my surprise the bidding on them was much more active than I anticipated. I put healthy bids on both lots, but only ended up with one......and barely got that one.

This is a picture of the lot that got away. 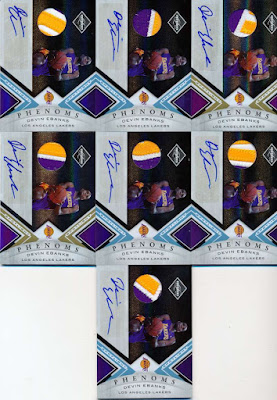 The lot sold for $45.  I had time to jump in again, but paying more than $5 a card was more than I would like considering some would be repeats in my collection.  My main interest was the /10 gold versions.

Here is the lot I won. 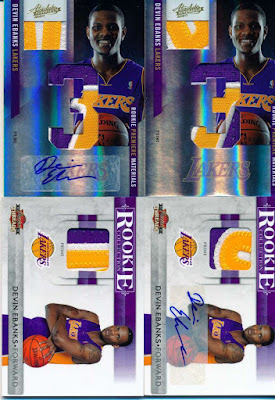 This lot ended up costing me around $25 which again was more than I wanted to go, but I really wanted the Absolute Memorabilia cards.  They are numbered to /5 and /10 respectively .  Been a while since I've seen them on auction so I wanted to pounce.

I really think if Ebanks played for the Bucks or some other team that doesn't have a big following these would be $10-$15 lots.  Either way I'm happy to end up with my most desired one, but a little disappointed about the amount I spent.  Obviously not outrageous, but I'm much cautious with my WVU spending than my Buccos collection.  I guess I can just tell myself I'm reallocating 2018 Pirate funds elsewhere.