I applaud any attempt to try and complete the card rainbow.  It is a borderline crazy venture that involves a hefty dose of both time and money. For me I've only attempted it once and failed about two months into the project. Damn work travel cut into eBay watching.

My attempt centered around the Kevin Newman and Kevin Kramer 2016 Topps Pro Debut cards. Both guys are featured in the WV Black Bears uniform. It was the first major release to show the new Morgantown WV based franchise.  I actually hit the ground running by finding the true 1/1 base Kramer card and a couple of plates of Kevin Newman. I hit a snag when I missed out an insert plate of Kevin Newman when I was in Rhode Island in September. I'm still looking for the cards, but the chance of getting all the low numbered stuff is about 0%.

With that being said budget friendly versions of the cardboard rainbow do exist. If you limit yourself to the 3-5 card variation range and exclude the Mike Trout's of the world you can get a nice looking sample without having to break the bank for the 1/1's.

Sometime sellers will even do the work for you. One of the eBay sellers I buy from the most is someone that is breaking up his Pirates collection. He often lists mini rainbow lots of players. Such was the case with this Brock Holt lot. 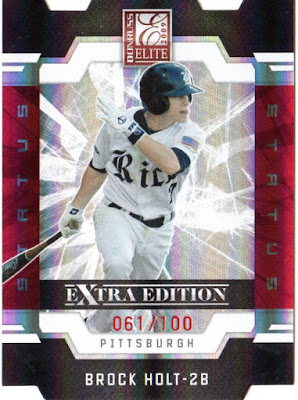 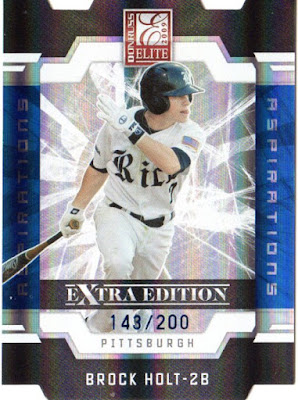 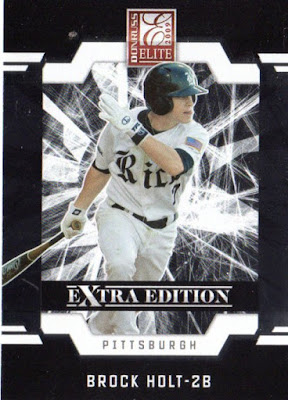 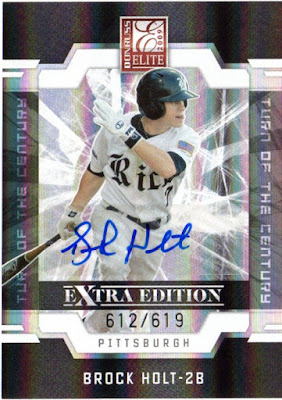 Holt only played a short time in Pittsburgh as he was traded to the Red Sox in the Joel Hanrahan/Mark Melancon deal.  Holt wasn't a big prospect at the time, but turned himself into one of the better super utility players in baseball.

I'm a big college sports fan so I'm a sucker for Donruss Elite products. Holt is shown in his Rice Owls uniform which is a deterrent for many collectors but a selling point for me.  This is especially true if WVU is involved. Panini has done a nice job utilizing the college license for MLB releases lately.

Thanks for reading.
Posted by BobWalkthePlank at 11:40 AM