Fractal Materials of the Joker

A lot of times selling prices are funny without context.  Right before I left for my trip to Savannah I purchased this card. 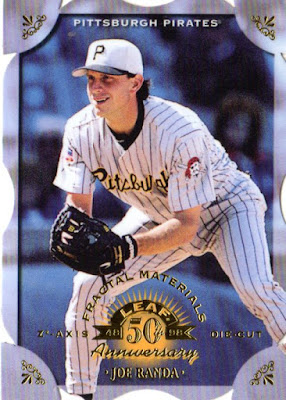 I sent a picture to one of my buddies and said I just paid $10 for a Joe Randa card.  His response was something like this, bwahahshahahhahaha.  It is the right response.  Randa had a long career, but really nothing justifies paying that much for a card.  "The Joker" as he was called should be dime box fodder.

As many of you know I have a weird obsession with finding obscure cards of forgotten Pirates. I love obtaining autos of the likes of Cutch and Cole, but the satisfaction of finding those hidden gems are what I find the most fun. 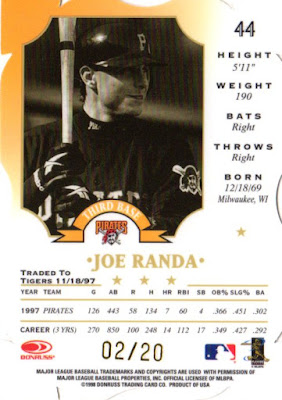 Do you remember the Leaf Fractal Foundations set?.........Neither did I.  In short it was basically a parallel brand of the regular Leaf set. The Z2 Axis cards were the diecut parallel of the base set. Some more obscure parallels exist that were nylon and wood.

Like many parallels during this time pricing can be all over the place.  The David Ortiz version of the /20 card sold for over $300 as did the Griffey wood card. Thankfully no one on the Pirates during this time would come close to those huge numbers. I've been watching a Jason Kendall that has been sitting on there for a few months with a BIN price of $24.  I'm hoping the seller decides to put it up for auction, although these cards are impossible to predict.  It may sell for $5 or $40, neither would be surprising.

So yes, I spent $10 on a Joe Randa card.  You can leave comments making fun of me below.

Posted by BobWalkthePlank at 9:51 AM