A couple months back I secretly booked a long weekend getaway to Savannah for my wife and I to celebrate our five year anniversary.  It would have been much more dramatic if I just picked her up from work and rushed to the airport, but in real life that is not feasible.  I had to work out babysitting and my wife works in a hospital setting so schedules are planned out months in advance. I let the cat out of the bag in early November.

First on the agenda was to drive to Pittsburgh Friday night for a nice dinner and catch a plane to Savannah in the morning. Hope you like food and booze pics because that is the best things to do when you travel. 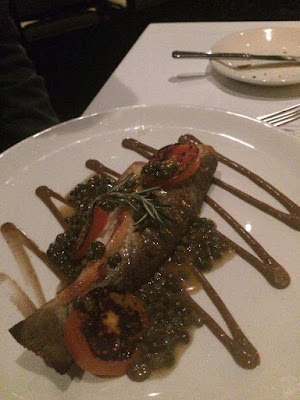 This is a Greek fish called Brozino.  It was outstanding. 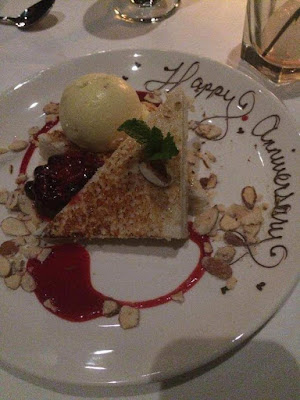 The dessert was a fun take on a grilled cheese.  It was toasted angel food cake with a sweet cream cheese filling.  My wife and I were stuffed after our main courses, but restaurant gave us this for free. 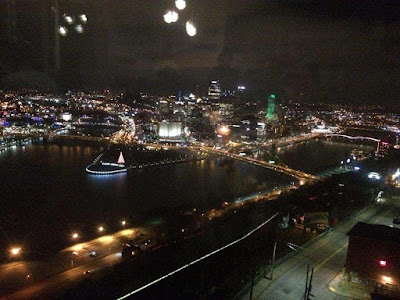 One of the main selling points of this restaurant is the view. This was the picture I took from my seat at dinner. You get a nice view of the Pittsburgh skyline. 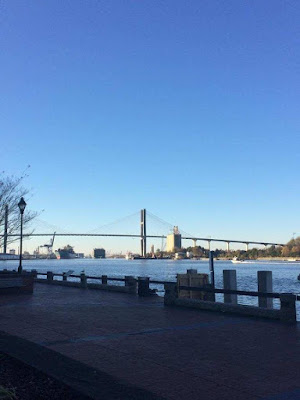 We arrived in Savannah mid afternoon.  This is a view from street around the river. 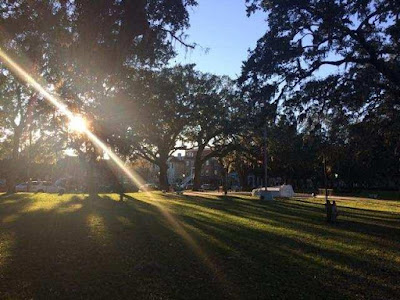 One thing that makes Savannah unique is all the parks. Almost every block has some type of space for pedestrians. 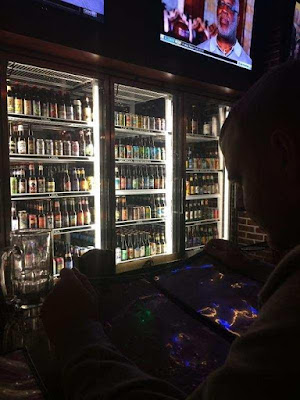 Pondering one of life's greatest decisions....what beer shall I order.  When the cooler opened up I'm pretty sure doves flew out. 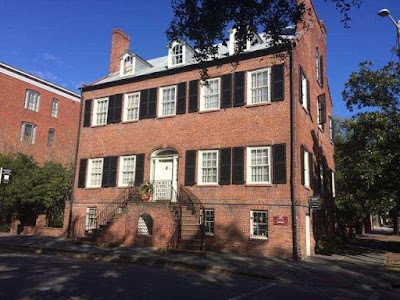 This is the Davenport Museum.  The original occupants of the house weren't famous but this is the house that started a chain reaction of preservation in the city.  It was a neat stop if you like architecture. Everything was built by hand. 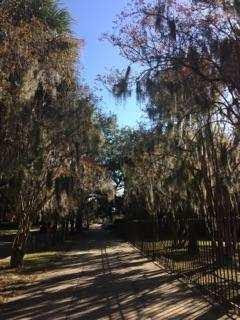 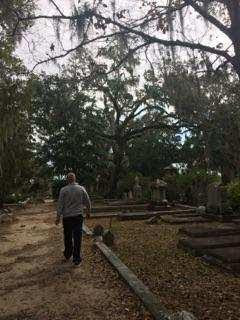 This is the Bonaventure Cemetery that played a vital part in the book Midnight in the Garden of Good an Evil.  My favorite memory of this stop was finding a gravestone of a woman who died in the late 1800's with this quote..."She Did What She Could."  Funny stuff! 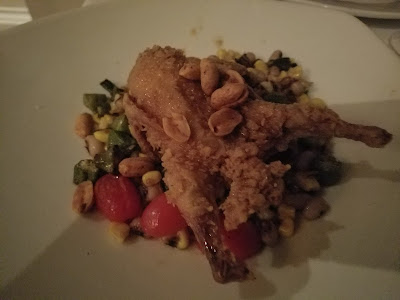 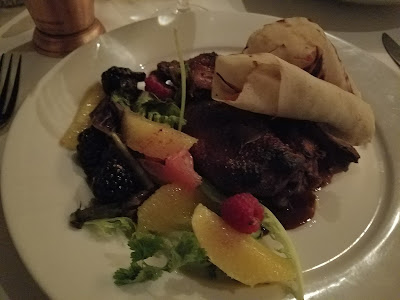 Above are the meals my wife and I had at The Olde Pink House. Up top is quail and below is crispy duck. 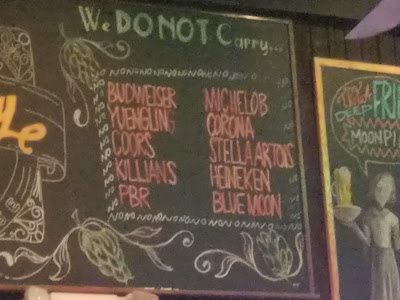 As most of you know I usually try and sniff out a good beer bar.  I was in Savannah a year earlier and came across a bar called The Distillery.  It had a great tap list and was very upfront about what they don't serve.... 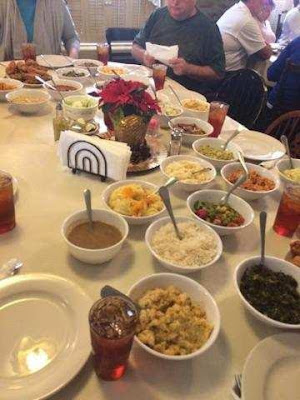 This picture is from a lunch we had at a place called Mrs Wilkes' Dining Room. This place has no menus and a set price for a family style feast.  Notice all those bowls......they each had a different type of food in them.

In my previous trip to Savannah I was told about this place, but was warned that lines get extremely long.  Fortunately we only had to wait about 20 minutes as this was a down time for tourism and the first wave of patrons were leaving the restaurant. 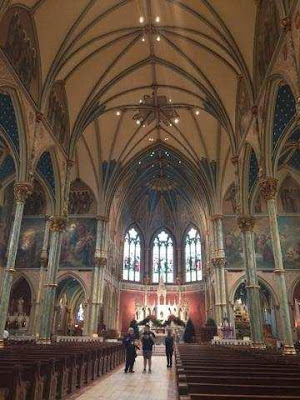 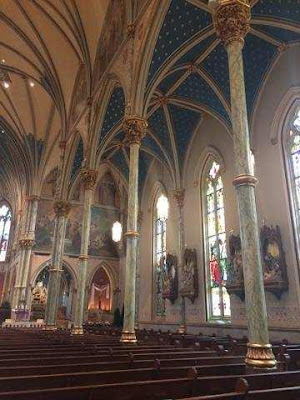 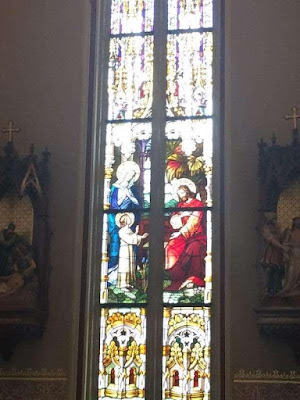 My wife likes visiting historic churches.  This was the Cathedral of St. John the baptist. They've had a recent renovation and it was very impressive.

Here is my one funny story from the trip....

My wife and I had been out the better part of the day exploring the town and decided it would be nice to have a drink outside. We stumble across a bar that is a little off the beaten path called The Rail Pub. 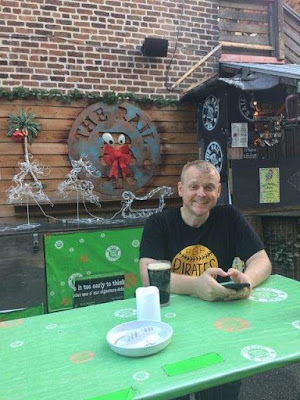 Innocent enough right.  Here is a pic before anybody was in the bar. That is yours truly sipping on a Guinness.

It turns out the bar caters to a more local clientele and just so happen was having an Xmas party.  We were invited to stay for food and it even had an open bar for two hours. 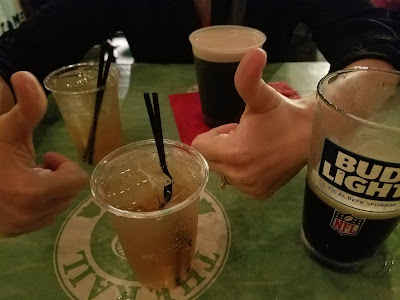 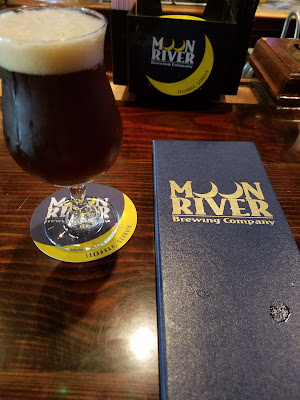 This was the lone brewery I visited.  It was called Moon River which was a song written by Johnny Mercer who was from Savannah. 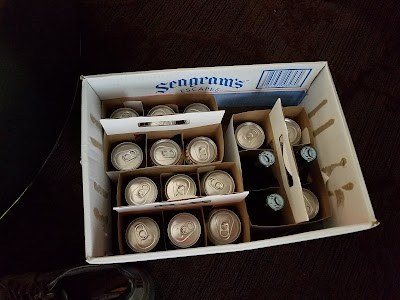 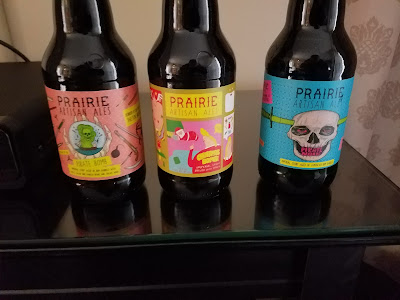 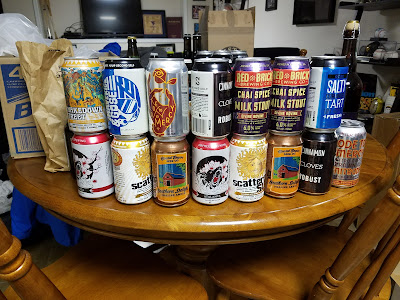 Whenever I travel I like to bring back some local beer for my beer tasting group.  I had a lot of extra room in my checked bag for this trip so I brought 18 beers.  The only three that were not local were the bottles of Prairie.  Those are just super hard to find anywhere in my area so I got a few for my own stash.

Well that is that. If I have one take away from this trip it is to do as much day drinking as possible.  You might run into a random Xmas party and drink for free.

Back to cards tomorrow.  Thanks for reading!

Posted by BobWalkthePlank at 5:45 PM