Sometimes you see a new release that grabs your attention for whatever reason.  Such was the case with 2017 Topps Pro Debut.  I always like the minor league sets, but this checklist was even more exciting than usual. 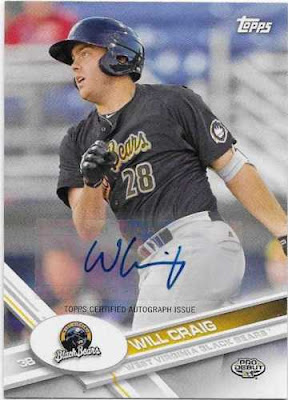 The first ever certified auto featuring a WV Black Bears uniform! Last year was the first mainstream cards with Kevin Newman and Kevin Kramer, but this year we get the Will Craig auto!!!!!  This picture is stolen from eBay, but I've already won the base auto and hope to add some parallels in the coming days. The Black Bears play about 5 minutes away from my house so I've made it a mission to accumulate all the cards released featuring the short season affiliate of the Buccos.

The one negative with this set is that it features a certain former Heisman Trophy winner so the prices for boxes will likely be higher than normal.  So it will be all eBay accumulating for the foreseeable future.

If you come across any Will Craig cards from Pro Debut I'll be happy to take them off your hands.
Posted by BobWalkthePlank at 7:22 PM