I think every team has that player that has been around for a long time, but for whatever reason lacks a decent amount of cardboard. For the Pirates this would be starting shortstop Jordy Mercer. He is well into his fifth season as a Pirate and other than some flagship cards here and there his card catalog is lacking. 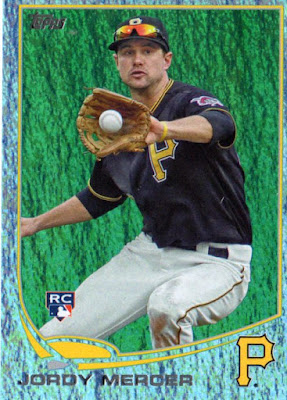 When I saw this parallel pop up on eBay I knew I wanted to grab it.  I also knew it would likely be one of those deals where I pay more in shipping than the actual card. I hate doing that, but the allure of adding a card of Mercer I didn't have was too much.  So here we are!

Overall it is a pretty nice looking card. In hand the background doesn't look as green as it does in the scan.  Looks like he is playing in overgrown grass in that picture.

Does your team have a guy that has been around for a long time, but lacks cards? Jordy's reason is that he wasn't a huge prospect. Those guys tend to not get the Bowman love.

Thanks for reading.
Posted by BobWalkthePlank at 10:39 PM