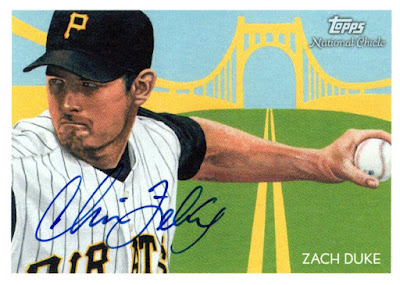 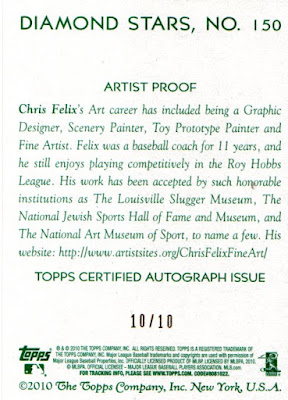 I have a weird fascination with sets that come and go after only one or two releases.  Not so much the high $ hit based, but the releases that are priced right but never catch on with collectors.  Sets like 2010 National Chicle are a good example.

From what I remember the release was well received by set collectors, but the lack of quality "hit" cards likely caused the downfall.  It is so hard for card companies to make a set that makes everyone happy.  I've always been a sucker for painted cards so I was a fan of this set.  The problem is if people are going to gamble $60 to $100 on a product they will want to at least have a chance for a big card.  Whether you think that is the right train of thought or not, it is the box busting thought process of many collectors.

This artist proof autograph came courtesy of Brian from Collecting Cutch.  It features Zach Duke and the picturesque Clemente Bridge outline. The card itself is signed by the artist Chris Felix. There was a fair amount of backlash that this set had too many artist proof cards in it.  Box busters claimed that they didn't hold enough value. Maybe that is the case, but I'm happy to own a unique Pirate card courtesy of the craziest Cutch collector in the blogosphere.

Thanks for reading!
Posted by BobWalkthePlank at 5:53 PM