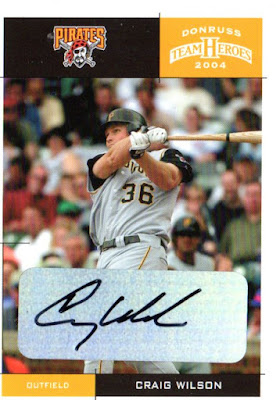 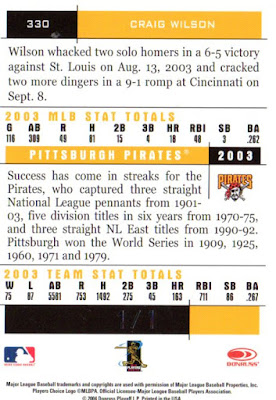 This card popped up on eBay while I was at the beach. It was a straight BIN of $20 and I pulled the trigger. I'm guessing I slightly overpaid, but it wasn't enough to risk losing a 1/1 auto of a player I really liked. My guess if the card was on auction it would have sold in the $10 to $15 range, but you just never know on the rare cards.

Team Heroes was a retail only set that featured an eclectic checklist.  You had stars like Arod and Randy Johnson, but since the set was so big (465 cards) you would find players like Craig Wilson. I love how the text on the back of the card said "success has come in streaks for the Pirates." I think that was Donruss's way of saying the Pirates are very shitty at this point of time.

I can't remember the last time I added a Craig Wilson  so this was a very welcome addition to the collection. Long live obscure players!  The thing about Wilson is that I always thought he played about ten years too soon.  I think his skill set would have played better today being that he could play multiple positions (including catcher) and was a very high obp guy.  He still managed a 7 year career so I guess things worked out either way.

Thanks for reading!
Posted by BobWalkthePlank at 4:14 PM