Starling Marte was busted for PED's a couple weeks into the season. His suspension has had quite the trickle down effect for the Buccos.  Coming into the season you could make the argument that Marte was the Pirates best all around player and maybe the hardest guy to replace. His suspension, plus some other key absences has put the Pirates behind the eight ball at what has turned out to be a wide open division. Who knows where the Pirates would have been having a non cheating Marte plus a sober Jung Ho Kang. That is about 8 War worth of players right there.

While I'm angry at Marte's greediness I still like to collect his cards. Maybe that is a bit hypocrytical of me, but hey....it is my collection.

Marte has a good following on eBay.  His new releases sell for good money.  The deals can be found on older releases.  It also help that some people have soured on him after the suspension. The below lot cost me about $10. 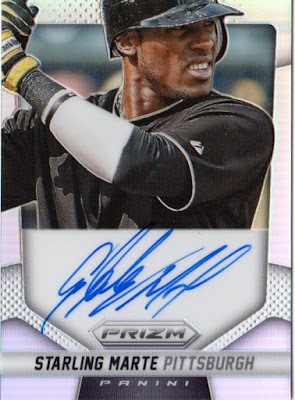 While Prizm lacks a license you do get a nice on card auto. 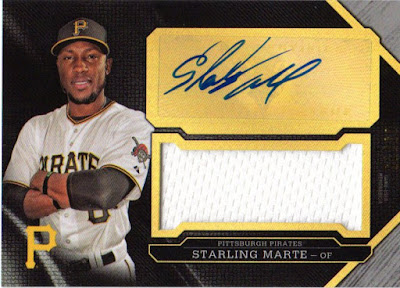 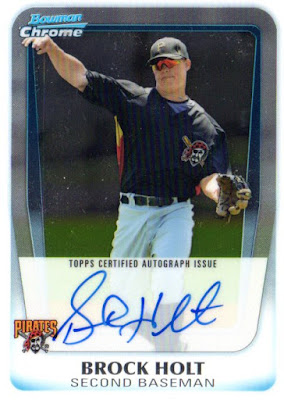 The seller had several Pirate cards, but the only other one I could win was this Brock Holt Chrome rookie auto.  Holt made his major league debut as a Pirate, but was traded the following offseason to the Red Sox in the Mark Melancon deal.  The trade was odd in that Melancon and Holt were secondary pieces at the time, but turned into the centerpieces almost immediately.

As a fan of the Pirates I'm upset that Marte knowingly cheated the system. Ultimately he has to answer to his teammates and the fans. I'm just not one of those holier than now people that shun a guy after the suspension.  Once he serves his time I will continue to root for Marte. I have better things to do than boo athletes.

Posted by BobWalkthePlank at 9:51 PM