You probably don't read this drivel for hot takes about whats happening in the world of cardboard. In fact I don't really know why you read my nonsense, but I'm grateful you come along for the ride. My guess is you all secretly think I'm Bob Walk or love hearing about a new middle reliever auto I picked up!

As most of you know I'm not a set collector.  I'm always jealous of fellow bloggers that can dissect a set so perfectly and then compare it to sets across years.  These posts are important as they are nice change of pace from the "sick hits" collecting mentality on most social media sites. I feel like the blogs help as a nice way to show that people can appreciate all types of collecting.  Sometimes it is good to have a little base card appreciation 101. I'm just not the person to teach it.

My collecting brain tends to focus more on content than design. I can look past a lot of design flaws if some obscure Pirate or Mountaineer is featured.  I love base cards, but don't feel like I'm a good person to give a review of an entire set.  The set as a whole could be piss poor, but if a Pirate middle reliever got his first card you better believe I'm buying that card.  I'm also likely posting said card on the blog and praising whatever Panini Pantheon Spectra Triple Play Onyx set it came out of.

In some ways I kind of wish my collecting brain would tell me "hey that card is kind of ugly." Unfortunately the side of the brain that likes well thought out design is overruled by the one who likes variety. "Hey Matt this is your left brain, that 2015 Panini Prizm set looks like shit." More powerful right brain, THAT SET HAS A JARED HUGHES CARD!!!!.  That pretty much sums up my collecting and why I rarely do set reviews.

Ok, I better show some cards now.  Maybe I'll try and do a review!

Contenders is a well known football and basketball set that features a deep rookie checklist. I've long been a fan because deep checklists means I can find obscure Mountaineers.  When I heard they were making a baseball version I was excited.  The 2015 set was a personal favorite because it featured 3 Black Bears. 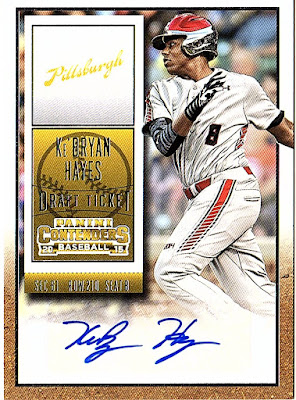 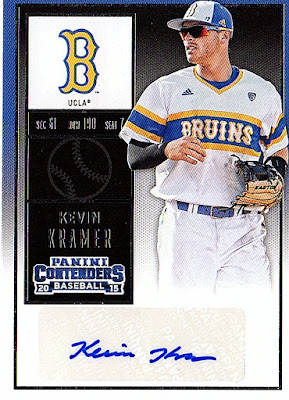 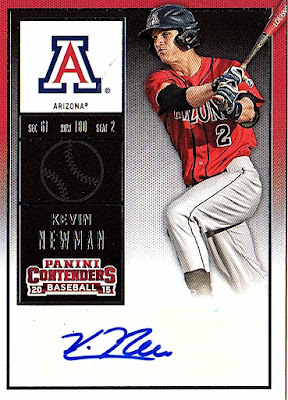 Whenever you feature college baseball you are obviously making a niche product. On the flip side it makes for a nice way around the MLB licensing issue.  If you like prospect autos you should check out this set.  You can get some big names for a fraction of the Bowman price.  I think all three of these cost me around $7 total.  Both Hayes and Newman are big prospects in the Pirates system and Kramer is coming off a huge season.

Now all of you go out and buy Contenders autos based on this glowing review!


Posted by BobWalkthePlank at 7:20 PM