My Pirates collection is based around being a team collector. Of course I favor certain players, but I don't have a desire to chase every release.  I crave variety so I like to spread my money around. With WVU different rules apply.  While I have the same mentality, the player pool is much smaller.

The core four in my collection are Pat White, Steve Slaton, Joe Alexander and Devin Ebanks. While I've always had a WVU collection, these four gave the collection the proverbial shot in the arm.  It allowed me to chase newer football and basketball releases that I had to ignore for the longest time because WVU had a significant gap in producing top round talent. Now WVU is producing top round talent on a more consistent basis so I don't accumulate as much of one player.

Long story short the core four flamed out extremely quick.  While this is disappointing my collection is more based on my collegiate alliance than professional success. This creates a nice buyers market. The time period these guys were drafted (2008-2010) was also peak auto/relic time.  So I have tons of cards to chase and with the ~10 year time lapse I've accumulated a ton.

While I'm no where close to having everything ever produced of these players, I am to the point where I'm adding mainly parallels.  Sometimes they are of the very unique variety like my most recent Pat White purchase 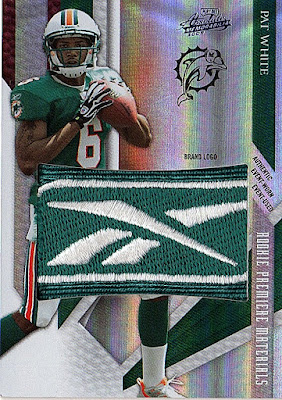 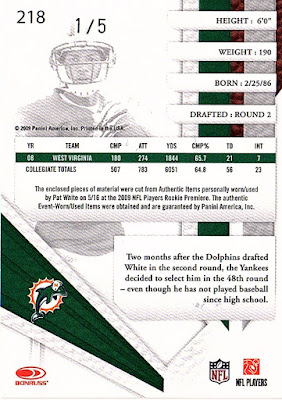 That is a prominent Reebok patch.  While I enjoy adding autographs this is one of the more unique White cards in my collection.  If I'm going to spend a higher $ amount I normally favor players in the WVU uniform, but this was so unique I pulled the trigger. I'm happy to give this one a good home.

Thanks for reading!
Posted by BobWalkthePlank at 7:57 PM