Finally had some time to get through some non JBF mail today.  Pretty excited about two cards that were unearthed.  As many of you know I'm an unapologetic NOW supporter. 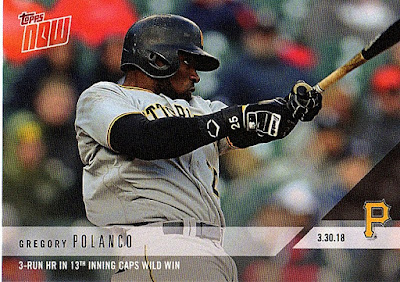 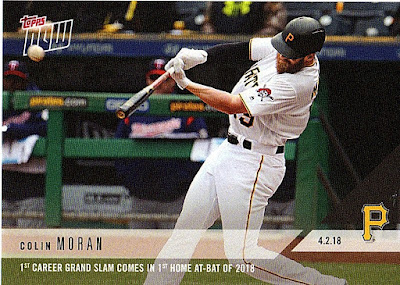 For the first two years the Pirates have been middle of the road in terms of cards produced which has made it a fairly easy set build. The most notable card produced happened to be card #1 in the NOW set (Francisco Liriano). I remember spending $30 on it and feeling ashamed.  Now it can fetch about 10X that so it turned out to be a wise move.

This year the Pirates are setting a higher pace in terms of production.  As of today they've had 6 produced. The above are the first I've received so far.  I'm most excited about the Colin Moran card as it marks his first card as a Pirate (minus the Spring Training NOW card). It was a legit cool moment too as he blasted a Grand Slam in his first home at bat.  Always refreshing when a non walk off NOW card is produced.

Posted by BobWalkthePlank at 10:44 PM