What Could Make This Cooler?

Bobbleheads were all the rage as stadium giveaways in the early 2000's. I remember people lining up at PNC Park hours before first pitch in order to secure one.  Then it just kind of stopped.  I'm not sure if this was just a Pirates thing, but people seemed to be suffering from bobblehead fatigue. I think a combination of the Pirates not having star personnel and the fact that they were doing close to double digit giveaways just wore everyone out.  Most people don't want their third Zach Duke bobblehead.

Things started to pickup steam again once Andrew McCutchen became a bona fide superstar, but overall I thought a lot of the releases were either boring or just looked like shit. 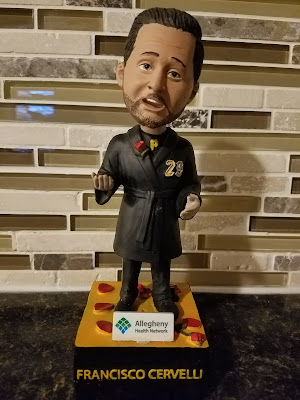 The last couple of seasons things have started to turn for the better.  The designs have become more intricate and they are using themes outside the baseball norm.  Last season the Pirates made their most unique giveaway that I could remember.  Yes that is Francisco Cervelli in a smoking jacket surrounded by roses. During the games the Pirates would play a segment where Cervelli would give dating advice. It was very cheesy, but everyone got a good laugh.  It was fashioned after that segment.

Now obviously the look of this bobblehead alone makes it a unique piece but this one goes the extra mile.  In the back their is a button if pressed starts playing Dean Martin's That's Amore! Pretty cool, right?  I rarely utilize eBay to buy these type of things, but I had to have one.

Thanks, for reading!
Posted by BobWalkthePlank at 5:13 PM