I like collecting prospect autos.  Extra bonus if it is a player I've seen in Morgantown.

Mitch Keller made his way to my neck of the woods last year for a short rehab assignment as he was building up his innings. You could tell he was wayyyyy too advanced for NYPL hitting.  He mowed down 6 hitters in what seemed to be about 30 seconds worth of pitching.  It was quite impressive. Guess it makes sense that he is the Pirates top prospect and is dominating every level. I'm guessing he may actually pitch in Pittsburgh at some point this year if the meteoric rise continues. 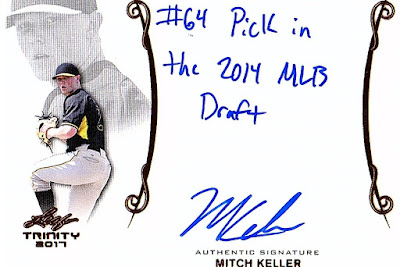 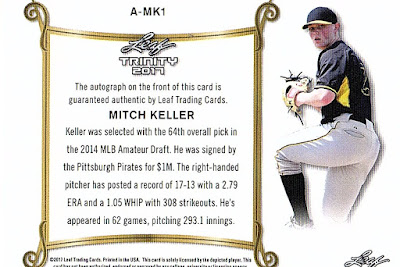 I'm paying around $4 for Trinity Keller autos instead of $15-25 for the Bowman version. I like adding Bowman autos, but I usually have to focus on the fringe prospects instead of the big names.  I use sets like Trinity and Bowman's Best for the top 100 prospect types.

Design wise I prefer the patch variations a little better than these base autos.  The patches cover up a lot of the wasted space left for the inscriptions.  Keller did a better job than a lot of the players of writing something unique.  Many of these just say "Go Pirates" or something of the like.

It would be kind of funny if the players were allowed to be crude.  "Can't wait to hit Yadi Molina in the ass with a pitch" or something like that.   Lot's of space to be creative....