I subscribe to a prospect oriented site called Pirates Prospects. While they have coverage of the big league team, their bread and butter is going into intimate detail on all the farm teams. Being that I have the NYPL affiliate Black Bears in my background it makes for a nice resource when learning about the new crop of players every year.

The site becomes extremely helpful around the draft and trade deadline time.  Last year the Pirates didn't make a ton of moves during the season.  The only notable player shipped out was Tony Watson to the Dodgers.  The deal kind of flew under the radar since Watson struggled a good bit in 2017, but the return for the Pirates netted an interesting prospect. 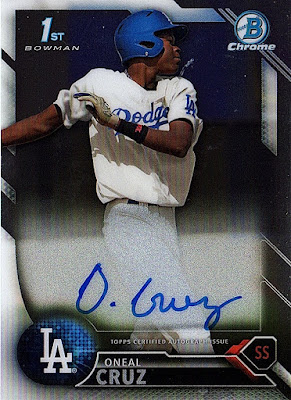 When you trade struggling middle relievers you don't get sure thing prospects.  Often times you get players like Oneil Cruz.  The thing about Cruz that makes him unique is that he is a 6'6, 19 year old shortstop. The Dodgers were playing him at third base, but the Pirates seem to think the footwork is good enough for him to make the permanent switch.  At the time the article was written about Cruz it is believed that he may be the tallest shortstop in professional baseball.

The article made mention how teams are starting to ignore positional bias that certain body types are made for certain positions.  The average height for a shortstop now is 6'1 with a few stars being 6'3 like Correa and Seager.

Who knows what the future holds for Cruz.  He has a long way to go being that he is only 19 and still filling out his frame.  It would be cool to see him stick at the position.

Thanks for reading
Posted by BobWalkthePlank at 7:42 PM