The week of awesome trades continue! This time Zippy from Torren' Up Cards sent what I thought was a nice stack of new Bowman cards.....until one little card fell out that took the prize of oldest card I've received in a trade. 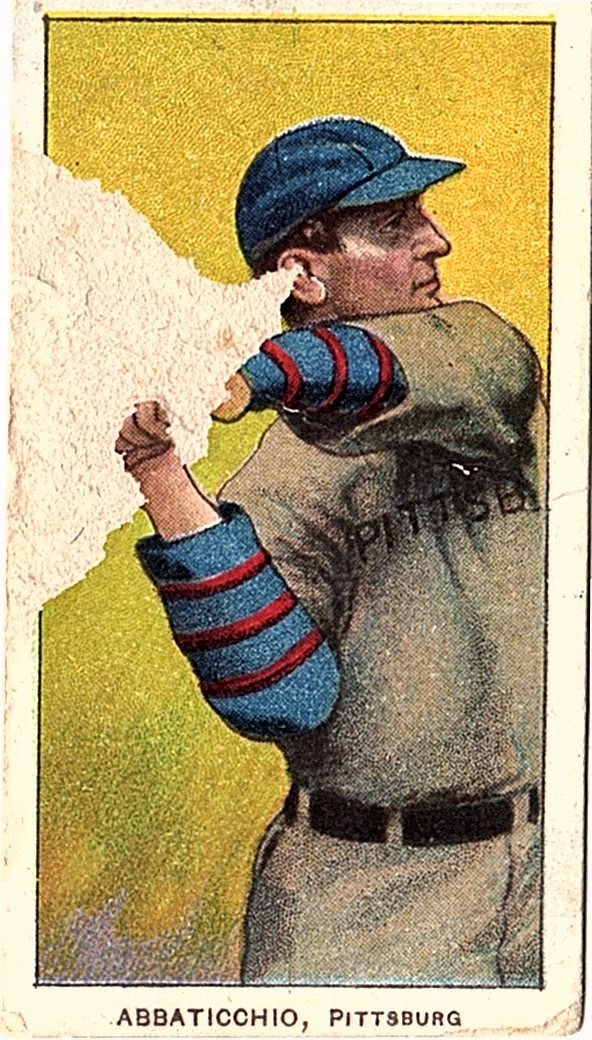 Yup that is a T206. How cool is that. I love that Baseball Reference gives all the fancy new stats for the old players. Did you know that Ed Abbaticchio had a 3 WAR season in 1908! 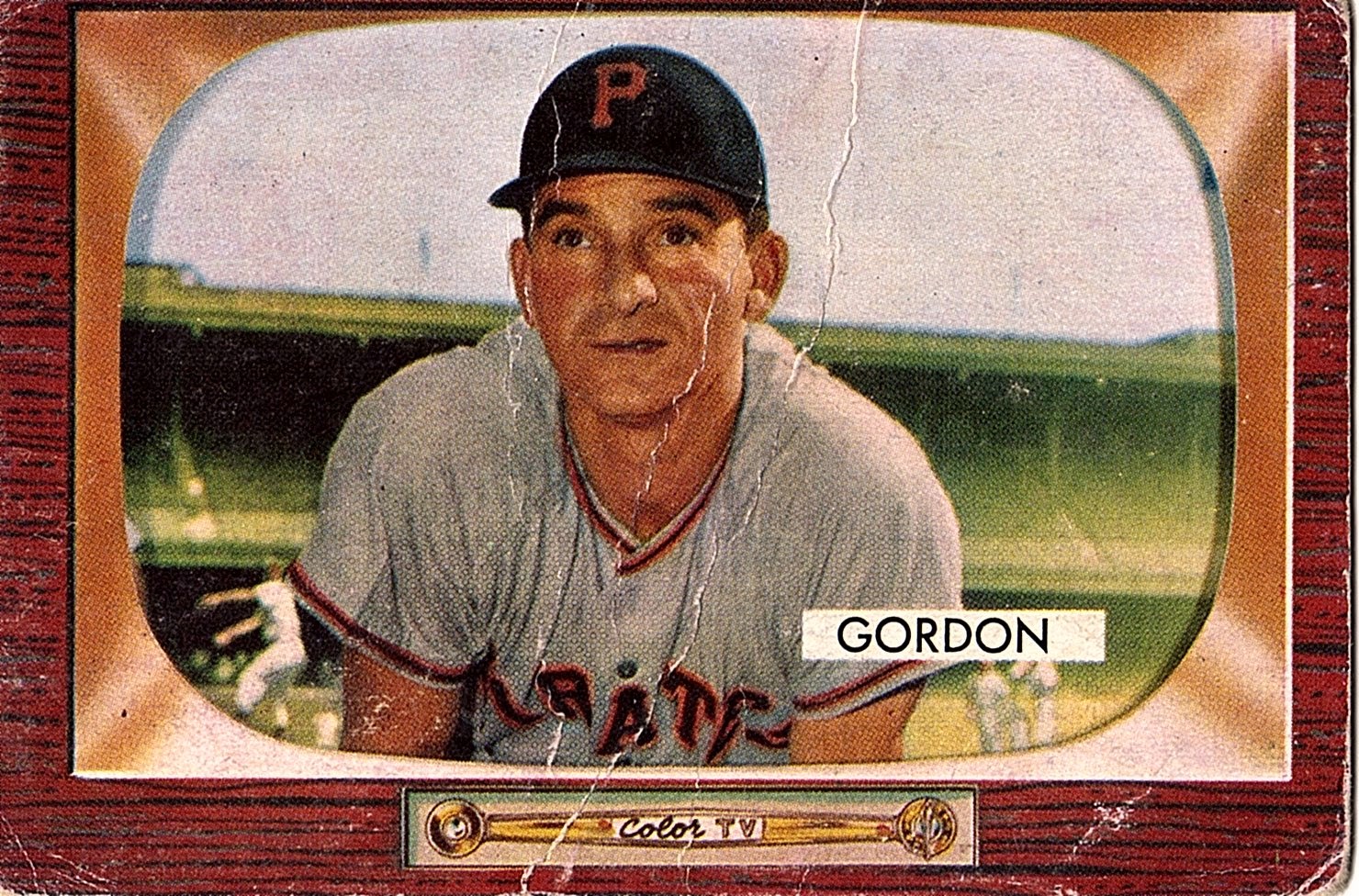 It is hard to slight a 1955 Bowman, but a T206 is a hard act to follow. Gotta love the tv set design. Gordon played for the Pirates at the tail end of his career. He has some big numbers with the Giants and Braves.

Now for the prospect cards! Zippy pretty much included all the big Pirate names. I think if I counted correctly 8 of the top ten Baseball America prospects are listed. 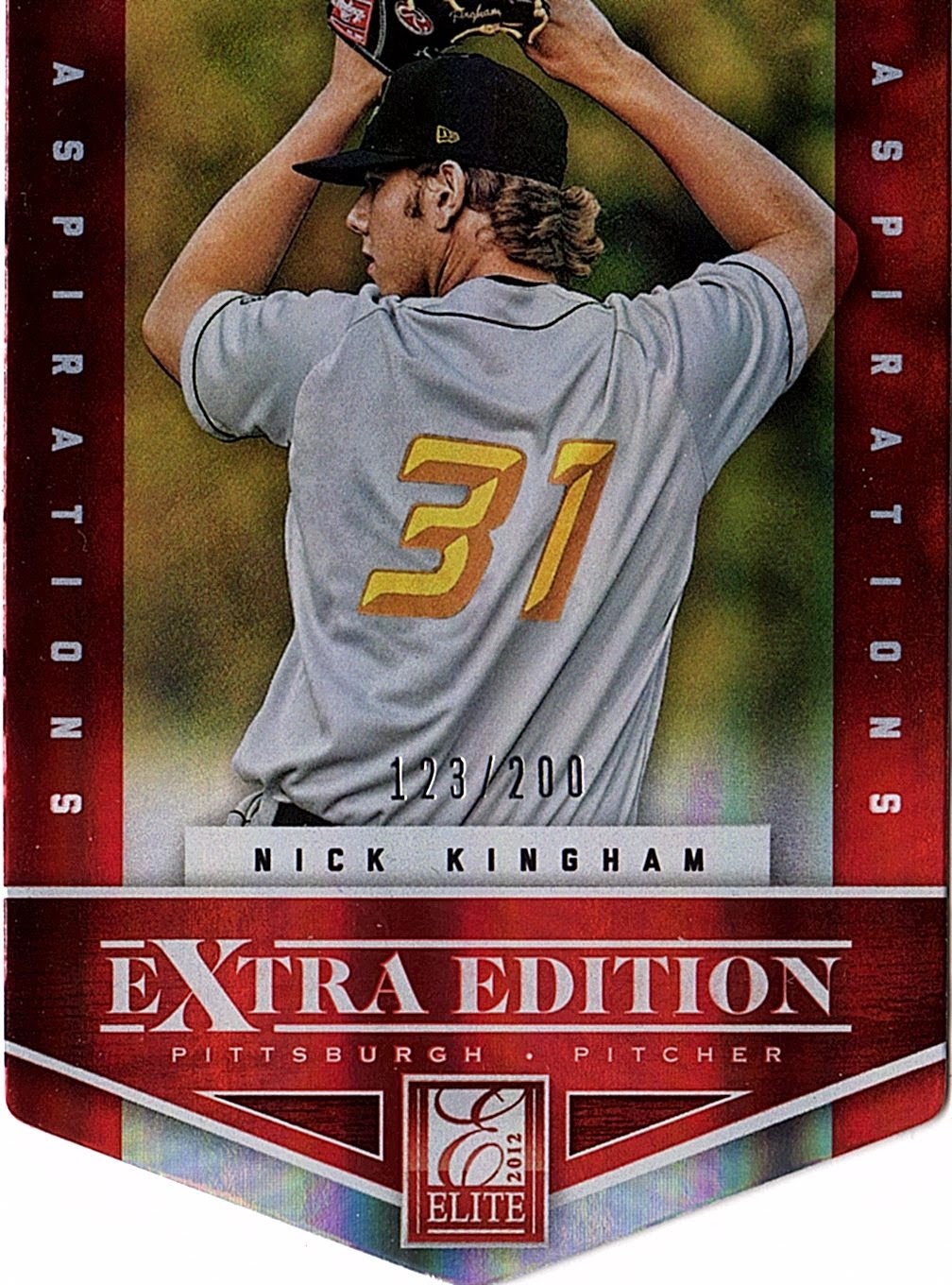 Nick Kingham has been making a steady rise though the system and should make his debut at some point this year. Probably doesn't have the ceiling as a Glasnow or Taillon, but the stuff is good enough to be a mid rotation starter for a lot of years. 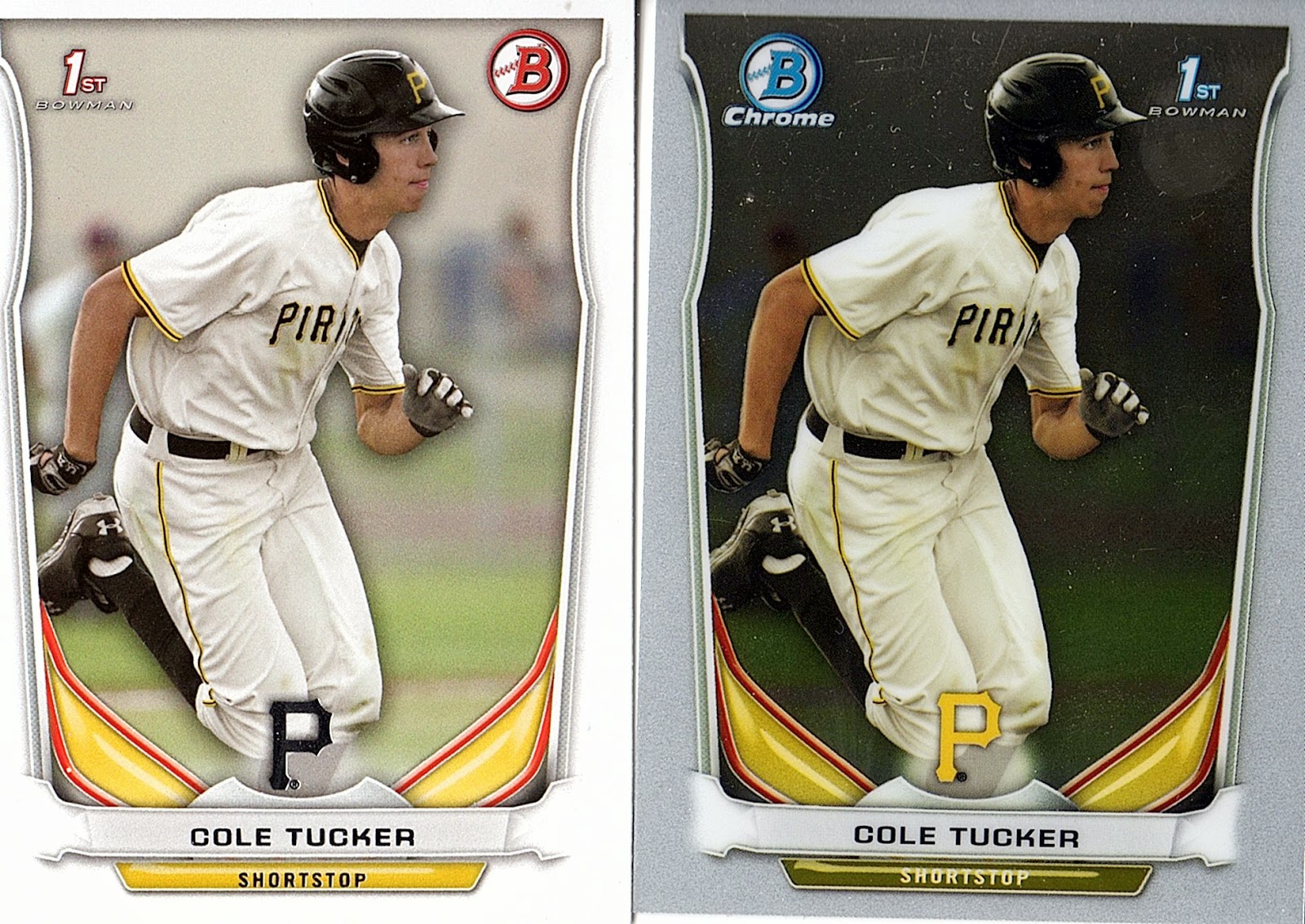 The Pirates first pick last year. Tucker is a shortstop with an advanced glove. If the bat advances he'll have a pretty high ceiling. Still a long way to go since he was a high school pick. 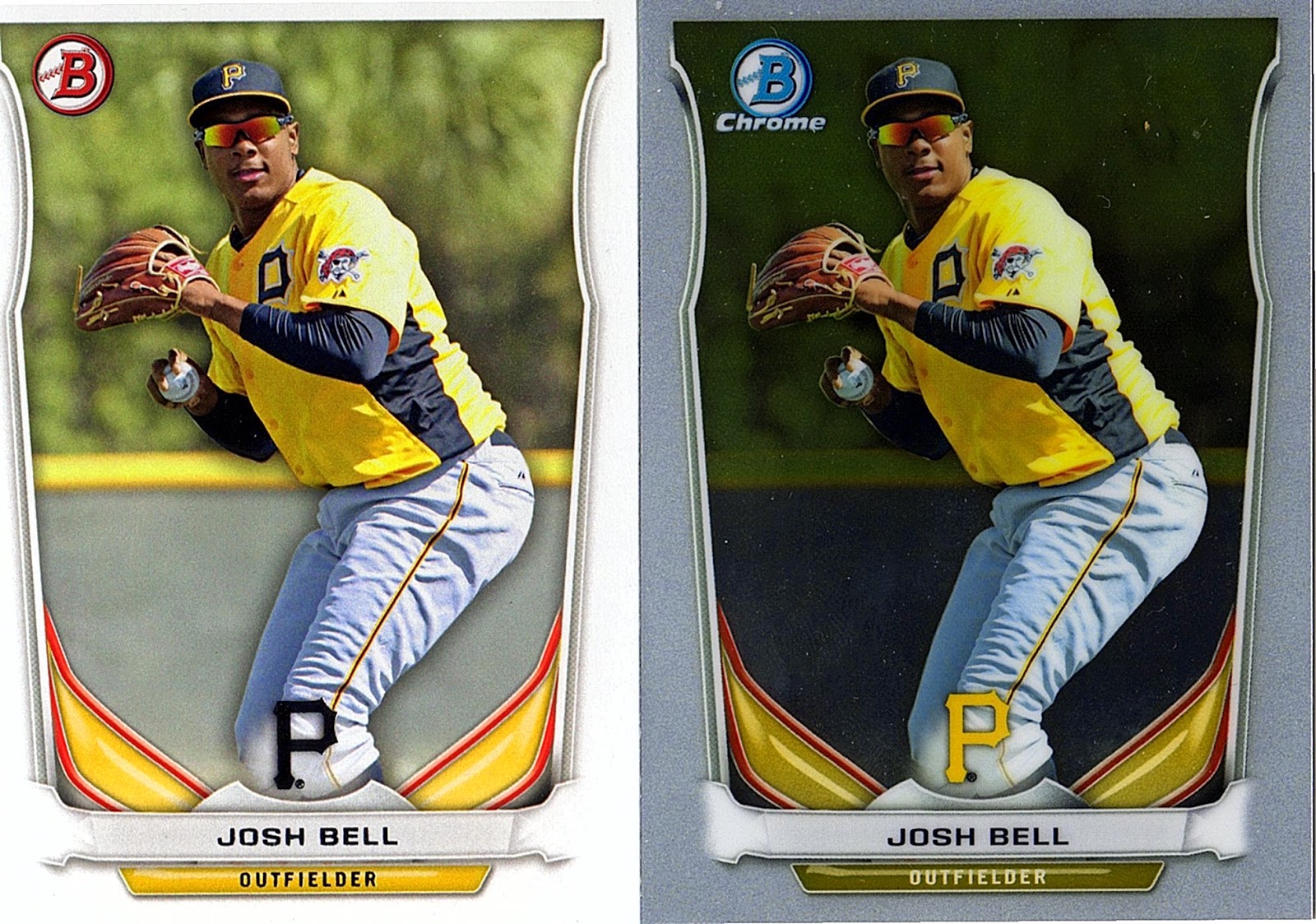 The Pirates moved Josh Bell to first base last year because if all things go well Marte, McCutchen and Polanco should have it wrapped up for a long time. Bell's bat is probably close to big league ready. Once he masters first it will make Pedro Alvarez expendable. 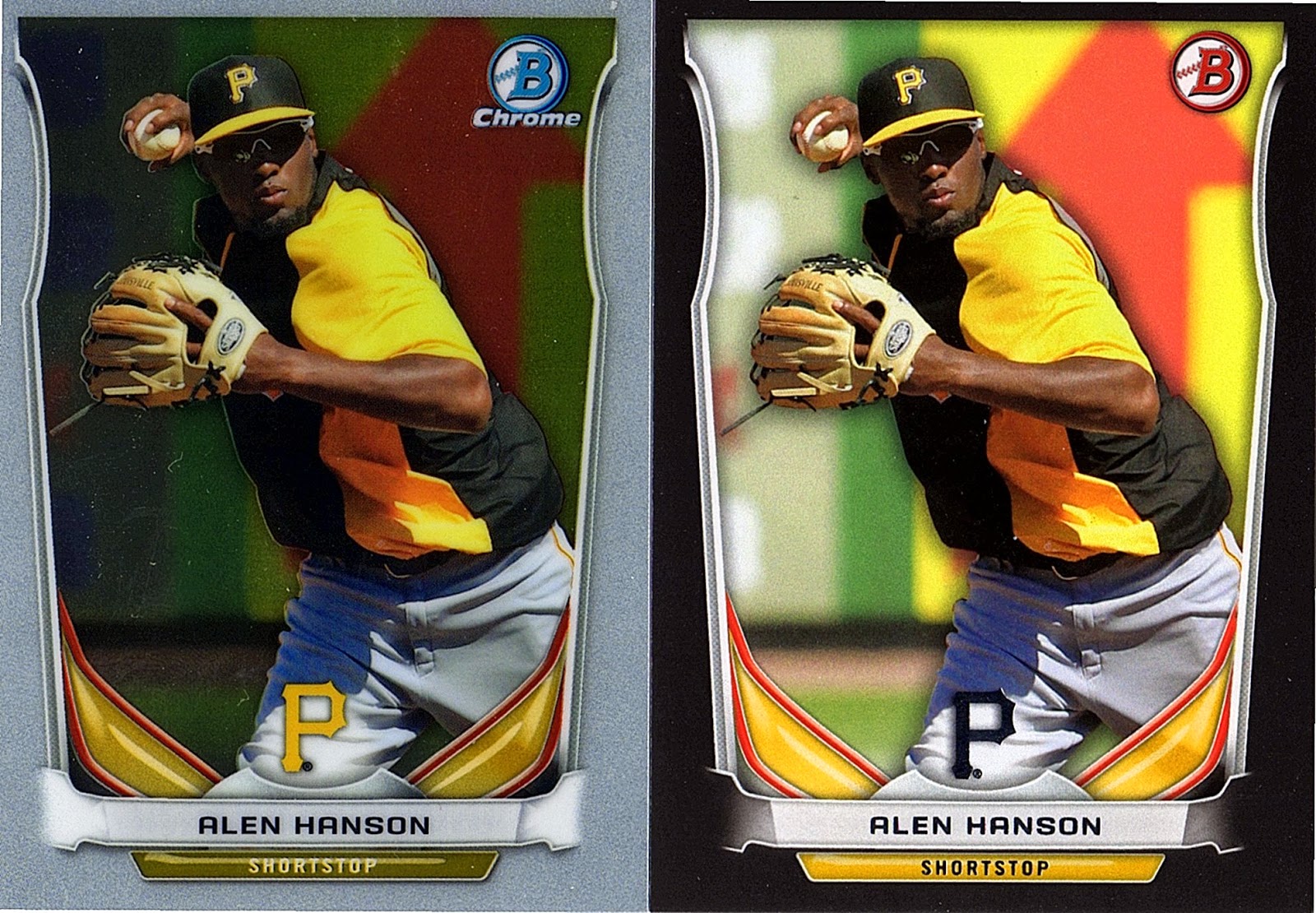 It looks like Alen Hanson could be the next Pirates second baseman. Signed as a shortstop his defense has been shaky. The bat has been pretty steady throughout his professional career and should be MLB ready after this season. 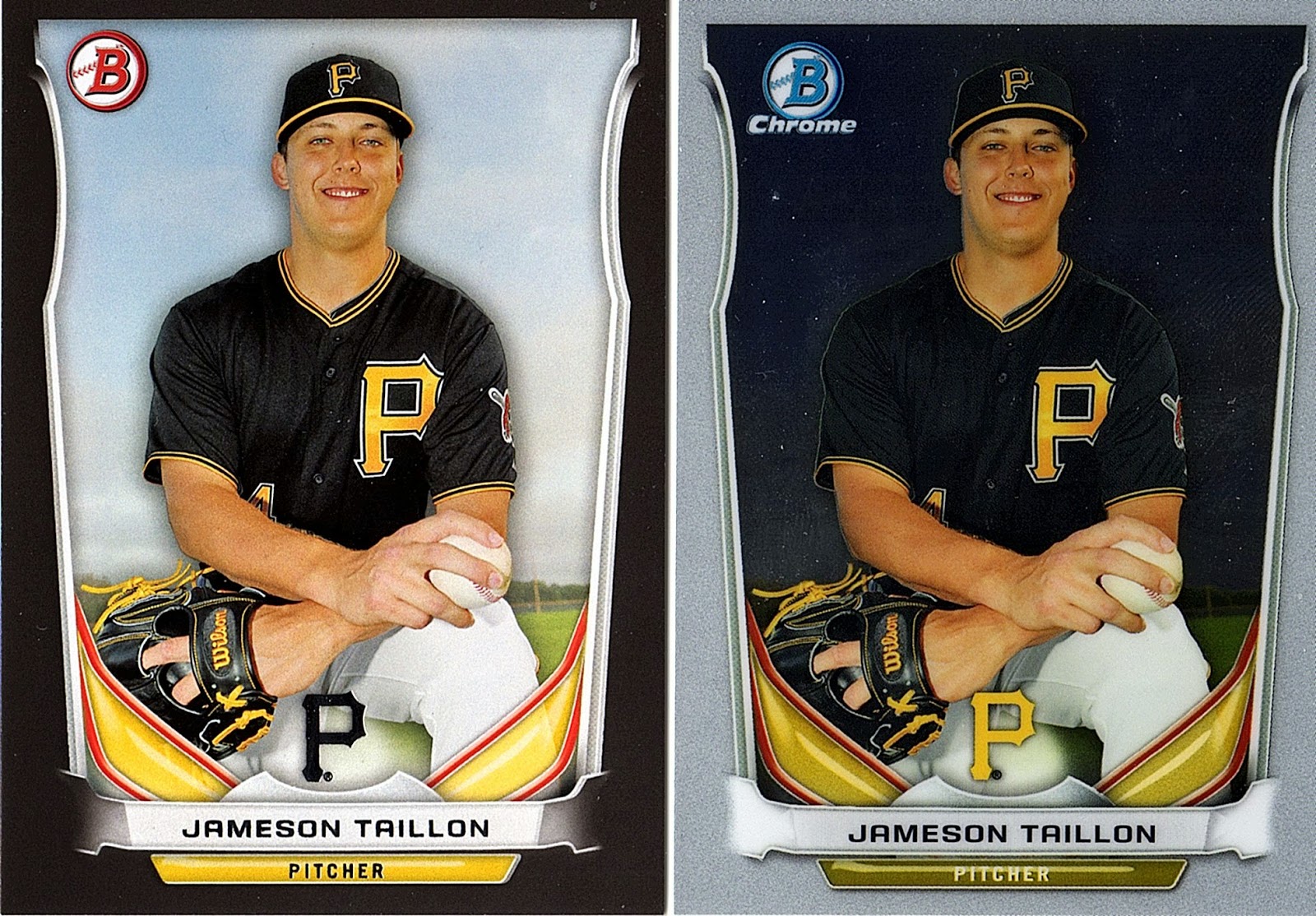 Taillon lost his organizational top prospect status after blowing out his arm last year. Still the young flamethrower could debut at some point this year.  I'm guessing he'll probably stay in extended spring training and join the AAA rotation later in the spring. 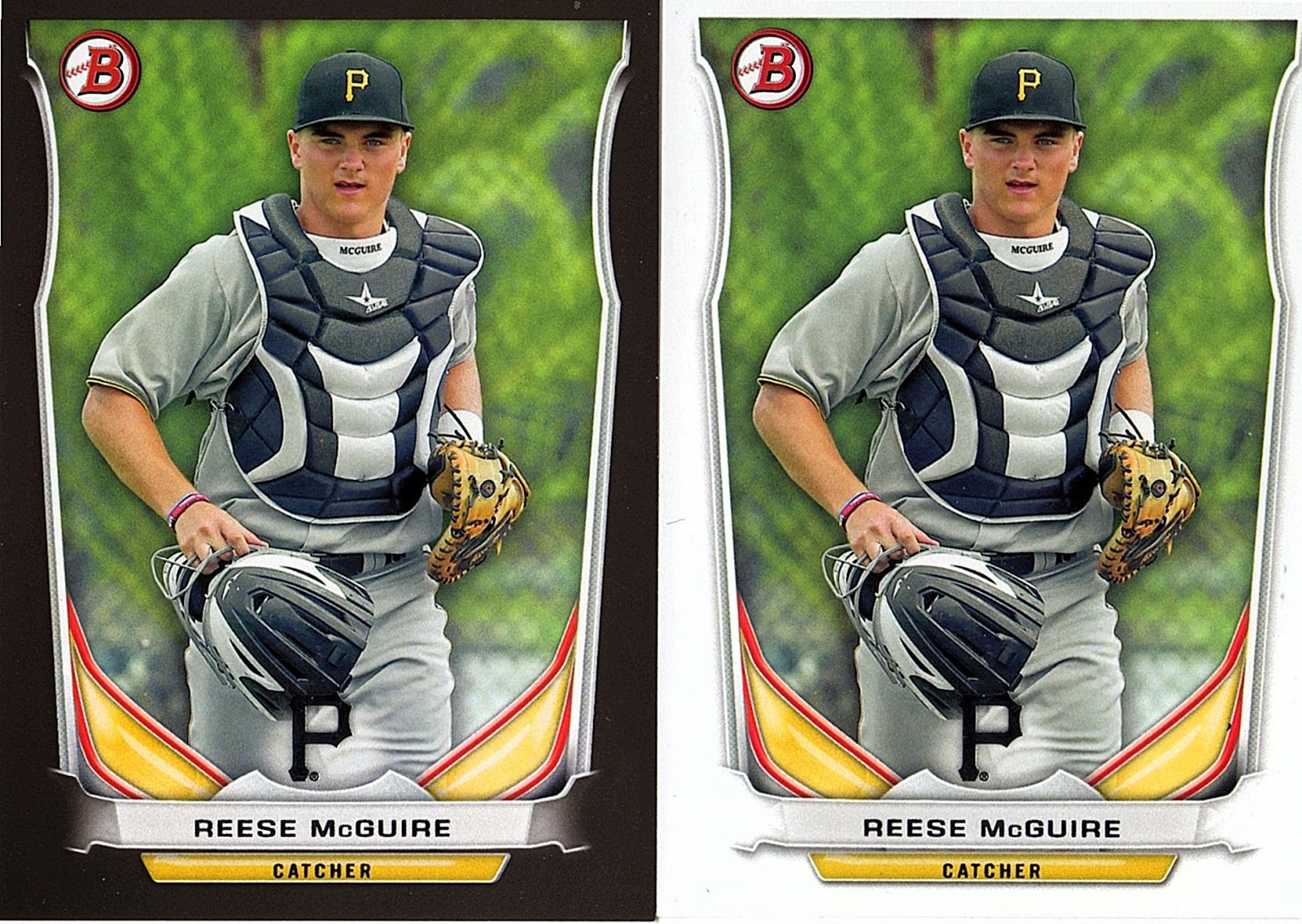 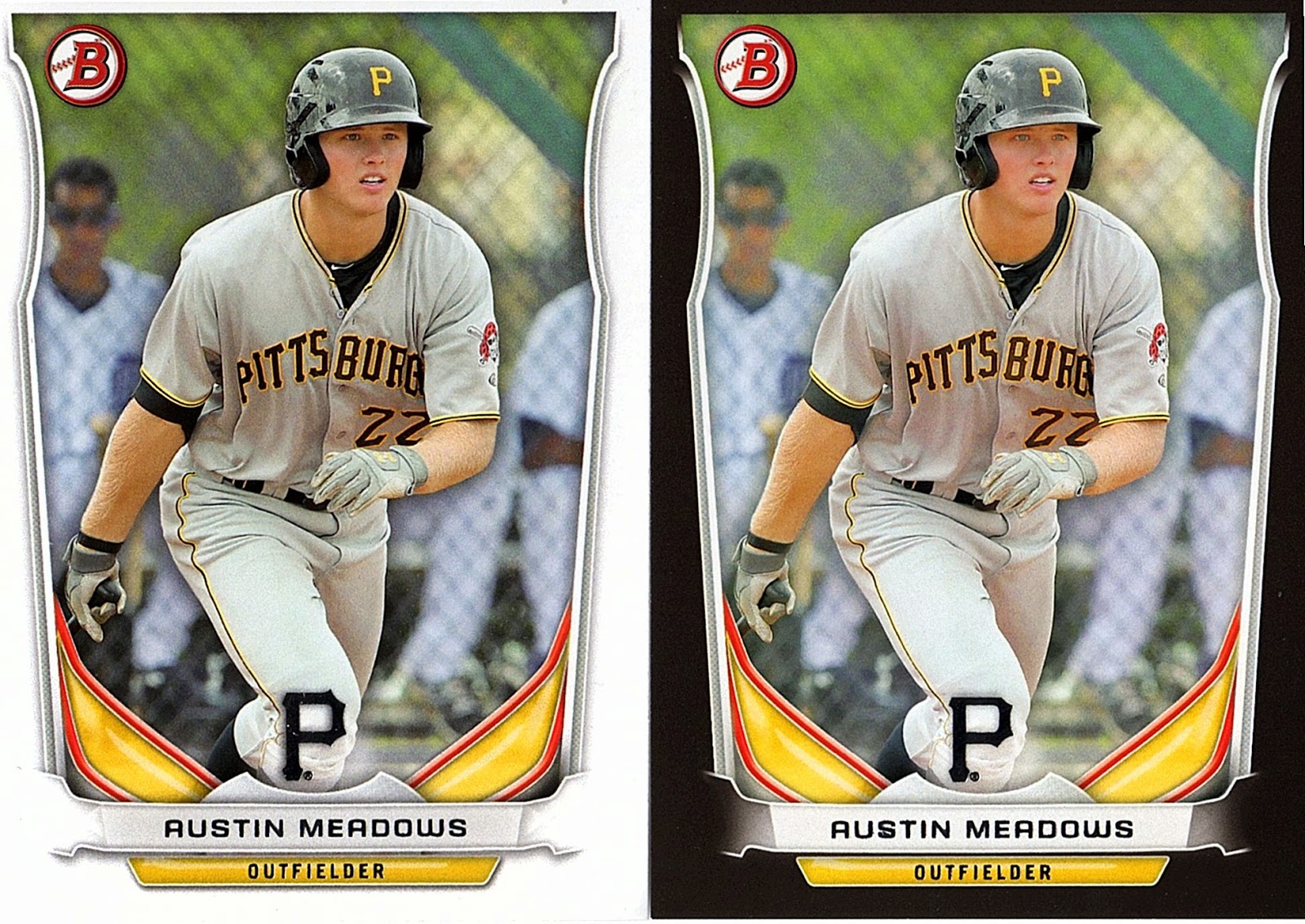 The Piraets were able to get McGuire and Meadows in the same draft and both have very high potential. McGuire defense is already considered advanced so if the bat becomes a little more consistent he will rocket through the system. Meadows is yet another athletic outfielder who has an incredibly high ceiling. 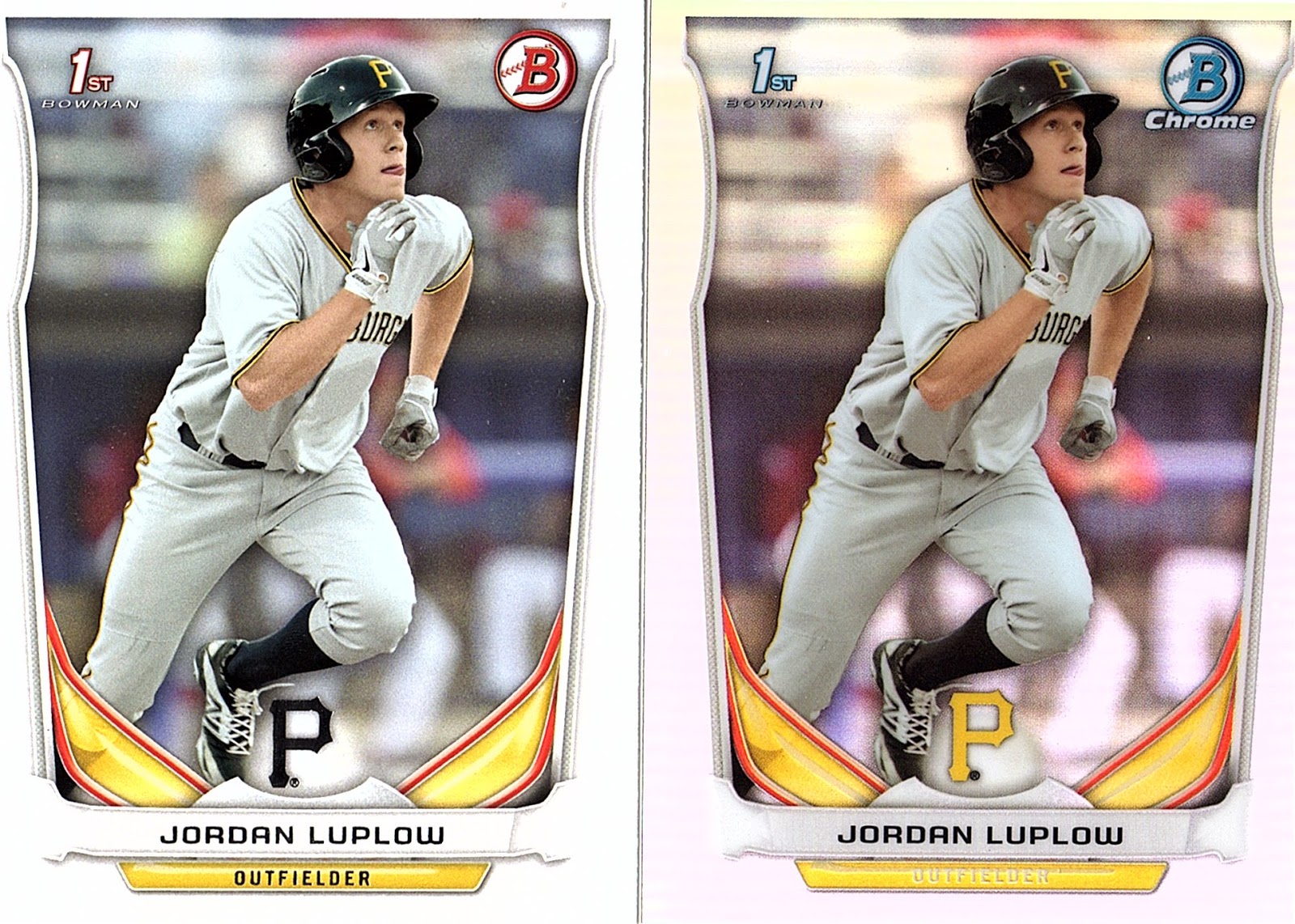 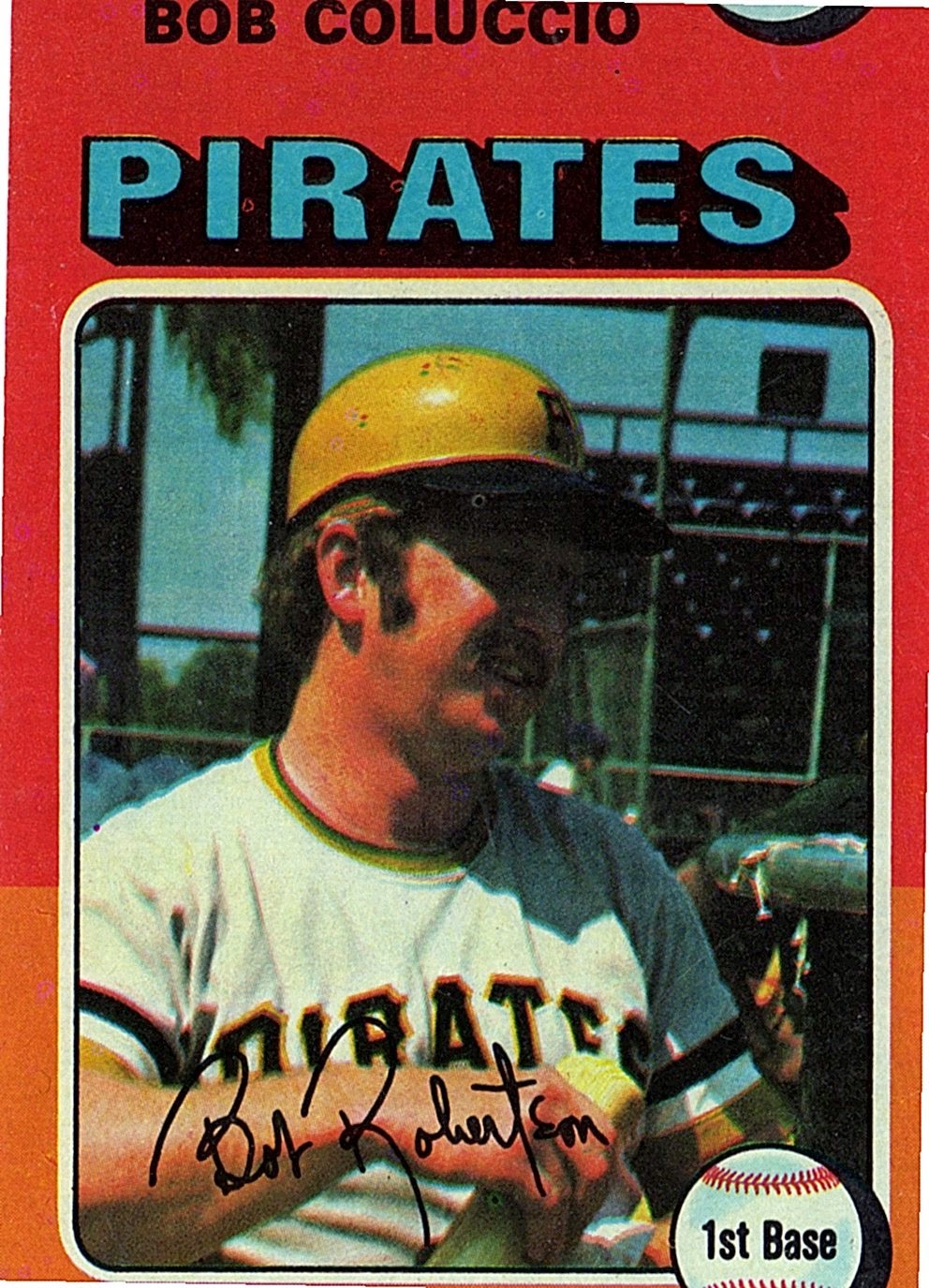 Now this is a glorious miscut card. 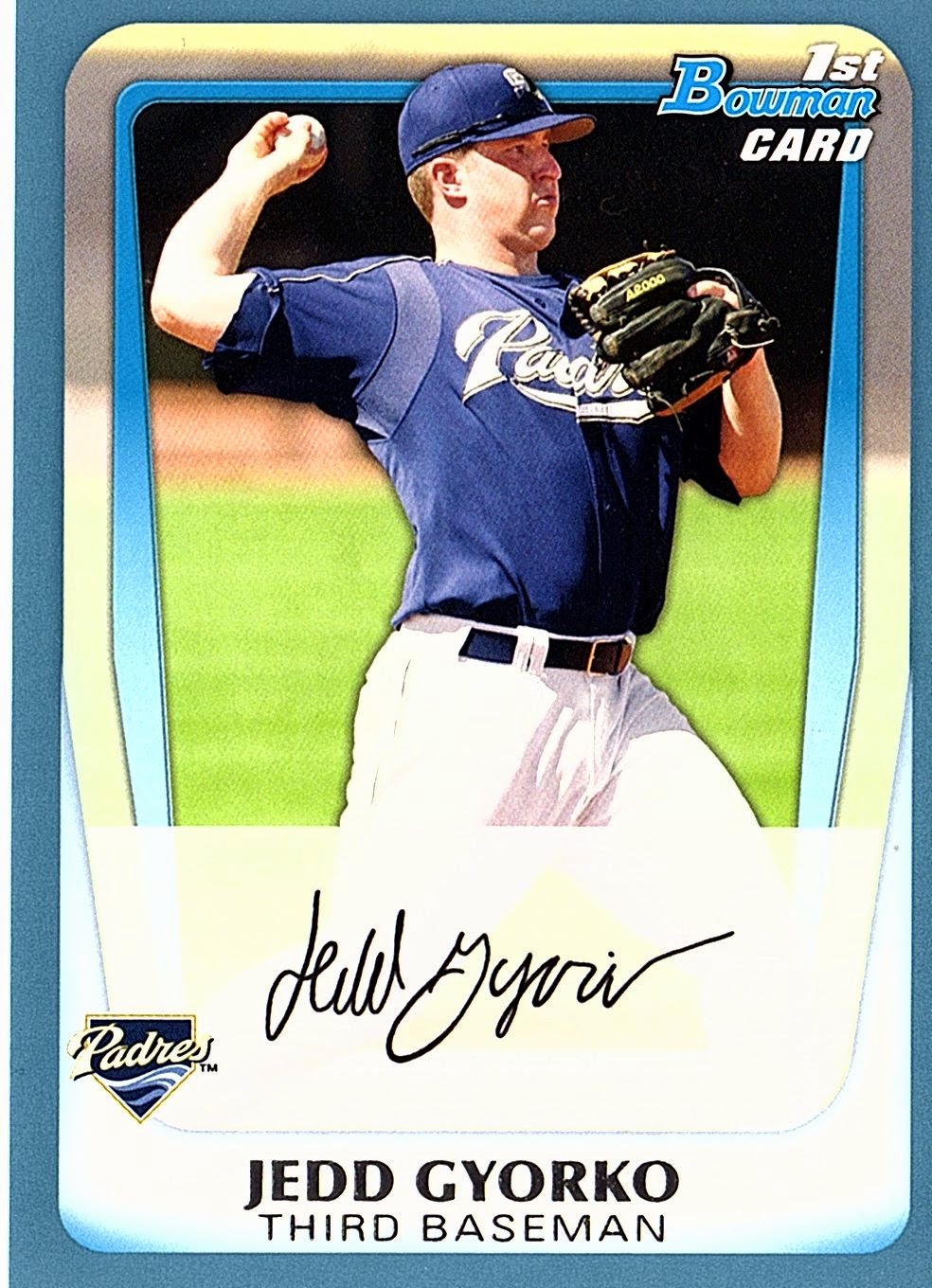 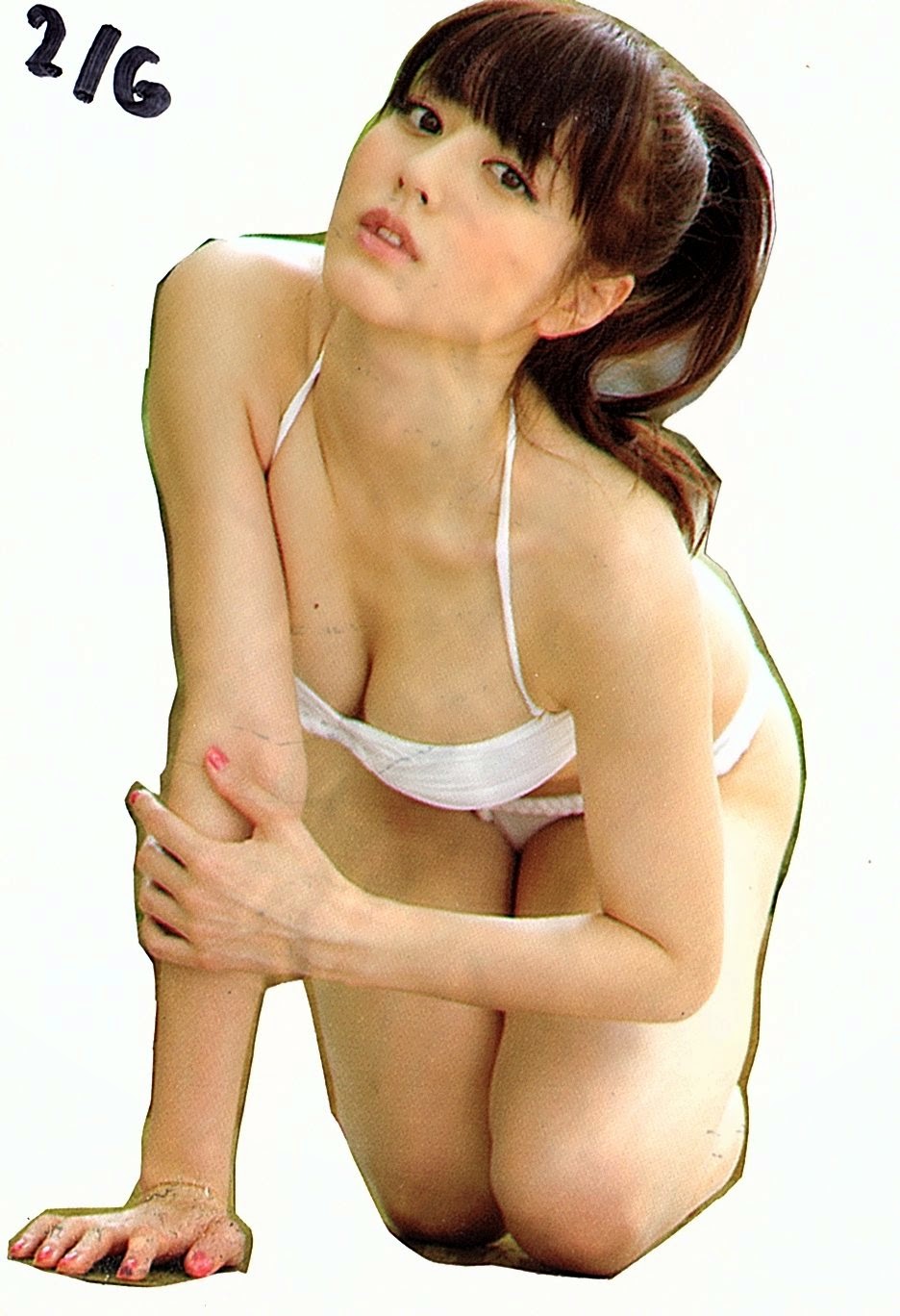 Thanks for the cards Kenny! You really outdid yourself. I have my work cut out for me, but I have a few ideas.

Posted by BobWalkthePlank at 10:33 PM

Email ThisBlogThis!Share to TwitterShare to FacebookShare to Pinterest
Labels: cervin' up cards, trade 2015