I'm having one of those weeks where something seems to pop up every evening to ruin my quality cardboard time. I was really hoping to have a good scanning day, but that will have to wait for now. Either way I still have a few minutes to showcase a new arrival. 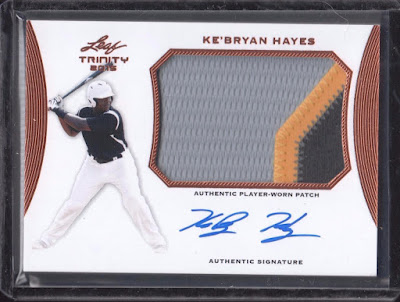 I've been a frequent purchaser of Trinity cards the last 3 years and have featured them several times on the blog. The set offers a nice alternative to Bowman products and a great way to cherry pick some of the bigger names autos on eBay on the cheap.

After only one year in the Pirates system, Ke'Bryan is already getting some prospect hype. Most think after this year he will climb into the Pirates top 10 prospect list.  He has a very advanced approach at the plate for being a high school draft pick. Also helps to have a good pedigree as his dad was former major leaguer Charlie Hayes.

Ke'Bryan had a brief stint with the Black Bears at the end of last season, but it looks like he will be heading to Charleston for this upcoming season.

The card above cost me around $10.

Posted by BobWalkthePlank at 11:22 PM