I've been good lately about not getting trapped into buying a card I really didn't want. I'm sure many of you have had that moment when you put in a bid and instantly regret it. Well a couple months back I had one of those.  In the grand scheme of things it wasn't a ton of money, but just enough to get mad at myself.

One of my favorite cards of 2015 was the Series 1 Pirates team card. I wasn't chasing a rainbow, but I made a conscience effort to accumulate the parallels that I enjoy like the silver frame and clear acetate. Well in early December this card popped up. 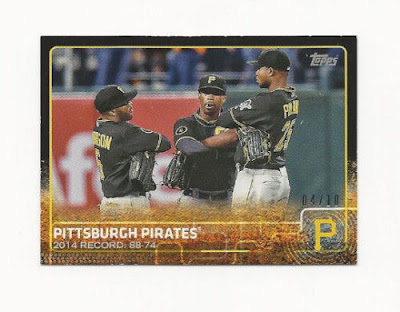 Obviously I like this card, but I've made it kind of an unwritten rule to not go crazy on parallels that aren't the silver and acetate variety. Obviously if I'm showing the card you know how the story ends. I ended up paying over $25 for this card. The price was really not too far out of whack, but it was the lack of discipline that pissed me off. For the most part when a card gets over the price of a blaster I usually stop and ask myself "do I really want this card." Instead of waiting I got sucked into the moment and overpaid for a card in which I could have done without.

This use to be a lot more common occurrence when I was younger and single. Now the goal is to make sure money is going to a card I actually enjoy and not blindly accumulating cards for the hell of it. Lesson Learned.....