Richard who runs the blog Toronto Blue Jays Collection recently approached me about having a few Pirate cards to send my way. What I didn't expect was how these cards would blow my mind. 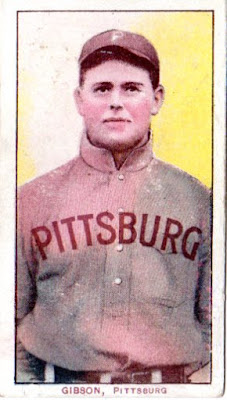 I'm getting a bit spoiled with this blog thing. I think this marks the 4th time I've received a tobacco card via trade. Talk about making an impact. Thanks so much Richard!

George Gibson hits close to both Richard and I. Gibson has a pretty illustrious career as a player and a manager. So much so he is in the Canadian Hall of Fame. Gibson both played and coached the Pirates.

I won't get too wordy here, but Gibson is an absolutely fascinating guy. He also had the Pirates first hit in Forbes Field.  Here is a link to his SABR page.

This card had me stumped.  I admit I'm pretty terrible at recognizing some oddballs.  Thanks to Richard he was able help me to understand the card after a few emails back and forth. This is a 68-69 SCFC of Honus Wagner.

Here is what Richard sent about the card....

The set is referred to as 1968-69 SCFC, even though the copyright dates
range from 1968 to 1970. It stands for Sports Cards for Collectors; for
some reason you'll sometimes see them referred to as SCFS.
It's an 82-card set, 78 cards and 4 checklist. 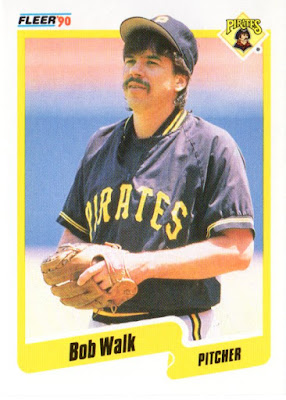 Last but not least is the legend. Richard said this is his only Walk card. Must be nice to ship off $10000000 cards like they are nothing. This will put my kid through college! In all seriousness I really enjoy getting all the Walk cards out there. My goal is to someday get the legend to mention me  during a Pirate broadcast.

Thanks so much for the cards Richard. It was so much learning about George Gibson and the oddball Wagner card.  I look forward to hitting you back shortly. Maybe I can find a cool Joe Carter.

Thanks for reading.
Posted by BobWalkthePlank at 11:59 PM