I don't really have anything earth shattering to say about 2016 Topps.  I'm a lot more liberal in my card collecting ventures. Very few sets exist that I loathe and very few exist that I'm shouting on rooftops confessing my love.  Like most sets 2016 falls somewhere in between that scale.

The first thing that catches my eye about a new product is the checklist. If I see a new Pirate in the set that usually gets my attention. It doesn't matter if it is unlicensed release or a Topps card. From there I'll explore a set for more ascetically pleasing cards of the more established Pirates.

I knew Series 1 was pretty light on new Pirates so I decided to pass on box breaks. Like last year I knew I wanted to grab a couple new silver frames with Neil Walker and Francisco Cervelli being at the top of the list.

For some reason Topps decided to make the silver frames even more rare this year lowering the number produced from 20 to 16. Early on prices are reflecting that. Just last night a Cutch version went off for $90......Yikes! 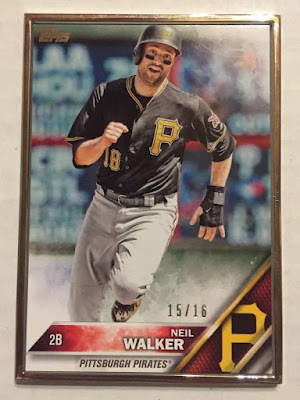 The last couple of years Walker didn't get much love from the card companies so parallels of base cards were the only chase cards on the market. Also, being that Walker is from Pittsburgh he has a decent amount of collectors chasing his stuff.  This causes card prices to shoot up.

Last year I watched the 2015 versions sell consistently in the $30-40 range. I snagged mine for shade under this threshold. Unlike my post yesterday about the mini parallel  I was happy to pay this amount as it will likely be the last flagship card of the now former Pirate. Plus, I really love the silver frames and have accumulated a nice collection of various Buccos.

If any of you happen to pull a silver framed Pirate I'm your man!

Thanks for reading.
Posted by BobWalkthePlank at 6:48 PM