Clyde Sukeforth is a Man of History

I couldn't sleep last night after the Super Bowl so I started fooling around with some cards. I've mentioned before that I tend to get sidetracked looking at vintage players as I get caught up in Baseball Reference and SABR pages. Such was the case with Clyde Sukeforth. 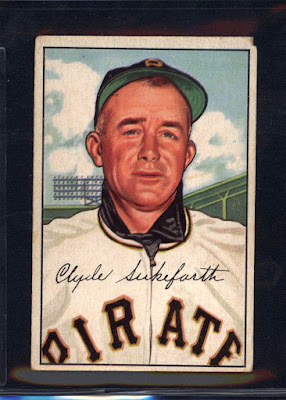 Clyde's playing career was unremarkable, but boy oh boy did he have his hand in some famous baseball moments after his playing days were over.  Working for the Dodgers Sukeforth scouted Jackie Robinson and was the one who brought him to New York to meet Branch Rickey.  He and Rickey were the only ones in the room when Robinson agreed to sign with the Dodgers.

Sukeforth was so vital that his character was portrayed in the movie 42. In the movie he meets Jackie at a rural gas station to try and convince him to come back to New York. In actuality this meeting occurred at Comiskey Park, but either way it shows that Sukeforth was a key player. I actually rewatched that movie recently, but still my brain didn't put it all together until last night.

The next major event Clyde had his hand in was the "shot heard round the world." Sukeforth was the bullpen coach for Brooklyn at the time and told manager Charlie Dressen that Ralph Branca was throwing better than Carl Erksine. Ouch......

You really should check out his SABR page. It is amazing to have your hand in so much history. I was really tired this morning after reading a ton of stuff about Sukeforth, but I'm glad I did.

The card featured was purchased for a shade over $3 and features Clyde as a coach for the Pirates.