A Piece of Glasnow

I'm in dire need of a good card maintenance day. You ever crave those? I know I do. I'm still sitting on a few big trade packages waiting for some time to really dig in and give them the posts they deserve. Once I get a couple hours I can finish out 2016.  Between college basketball, work and a non sleeping toddler 11pm can sneak up on you pretty fast.

Also have a couple of trade packages that need rounded out.  I think I've been holding a Mike Trout hostage from Gavin for over a month.  In my defense I'm waiting to throw a few more cards in there! Seems like a waste of space to have only one card in a bubble envelope!

How about a new card

Like previous years I tend to take my foot off the pedal buying new cards around the holidays. My biggest acquisition the last couple of months was the Kiner rookie that I posted about the other day. Most purchases have been the $5 or below variety like this card.... 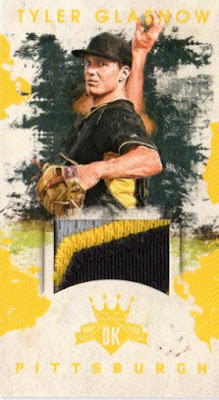 I've had good luck finding some nice deals from this set.  I bought a Taillon patch from the same set back in the summer for under $10. Other than the stupid blank hat this card would look really nice.

Glasnow is one of those love/hate prospects. Some like Keith Law think he is a front line type of starter while some on Fangraphs think the command and lack of a good third pitch will continue to plague him.  He is a big kid so many of the issues that plague tall pitchers has plagued Glasnow.  This will be a big year for Tyler as he'll likely get an opportunity to make the rotation. I'm really pulling for him as you can see why scouts drool when he is on his game.  High 90's fastball and a 12 to 6 curveball.  He will follow that up with a game where he walks 5 guys.  If he cuts the walk rate down the Pirates have a potential star.

Posted by BobWalkthePlank at 10:16 PM