For whatever reason I love manager cards. Maybe it has something to do with the fact that I opened about 10,000 packs of 1989 Topps as a child and can remember pulling the likes of Tommy Lasorda and Pete Rose.  I guess those memories fuel the present day desire to find modern Pirate manager cards.

My two biggest finds during my blogging time was this Danny Murtaugh auto and former white whale Gene Lamont. It seems kind of weird that a Gene Lamont auto would be so hard to find, but that damn card took 10 plus years to secure.

The last couple of years have been light in the manger card department. Topps released an auto set of GM's which featured Neil Huntington of the Pirates, but that was really the only thing of note in terms of Pirates. Thankfully 2016 Allen & Ginter came to the rescue. 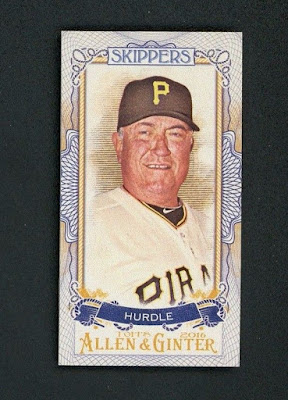 Of course this can't be a "normal" mini, but instead it was an unannounced case hit that fell 1:288 packs. Some of the bigger name managers like Maddon, Mattingly and Girardi sell in the $50 range. Thankfully Hurdle is a little on the cheaper side selling in the $20-25 range.

Is it stupid to pay that much for a short print mini card?.... You bet it is, but I knew I wanted the card and eventually the well would dry up on these as so many people collect Ginter. At last check only one Hurdle was on eBay. So right before Christmas I bit the bullet and won the auction. My weird manager card obsession continues.

Posted by BobWalkthePlank at 7:48 PM