Whenever I start to organize cards I become sidetracked within about two minutes.  I'll either pick up my phone to read something about a player whose name I just saw, pull a bunch of cards out that are blog worthy or spend my time trying to jog my memory how I originally came to own a certain card.

Sure enough the other day I was looking through some autographs and I pulled this card out. 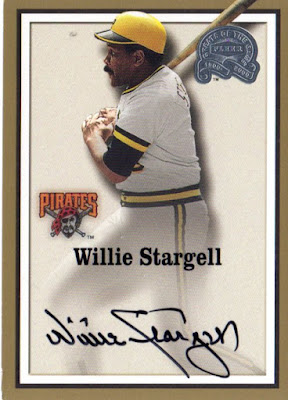 I actually think I traded for this card when a card shop existed in Morgantown. It is rare for me to find cards that were made in the 2000's that I didn't utilize eBay.

Greats of the Game is one of the more iconic auto sets ever created. The set featured some of the best players of all time, the autos were on card and the design was top notch.  It seems these have become even more popular as time went on.  I've actually read a few stories of people completing this set.

I have a decent amount of Stargell autos in my collection, but this is my favorite. Mainly this due for the fact that it is an on card auto as Pops passed away in 2001. Pretty much everything you see now is a cut auto.

Back to sorting......oh look a cool Kendall card.

Email ThisBlogThis!Share to TwitterShare to FacebookShare to Pinterest
Labels: 2000 fleer greats of the game, willie stargell