The dreaded first day of work after vacation.  People shouldn't be allowed to contact you at all while you are gone.  Maybe I'll leave an out of office reply next time that each question via email is $20 and voicemail is $50. That way only the really important ones get sent. I swear some people I work with have some kind of upcoming vacation sonar where they will try and track you down right before you leave or right when you return. Can't a guy just ease back into his routine.

You know what makes things better...Cards!

Right before I left Johnny of Johnny's Trading Spot hit me with a bubble mailer packed full of great Pirates. 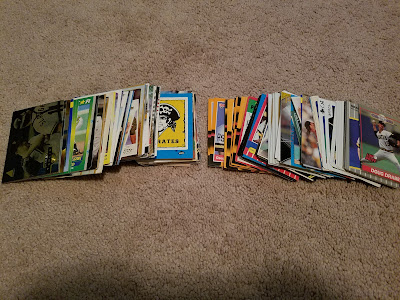 What makes John's trade packages so fun is that he often hits that mid 90's to early 2000's time frame that has so many holes in my collection.  I even collected actively during that time. Must be all the new sets that started up including many that only lasted a year or two.

The first cards that caught my eye were of Jason Kendall. To me Kendall has the best cards of any Pirate in the last 20 years. 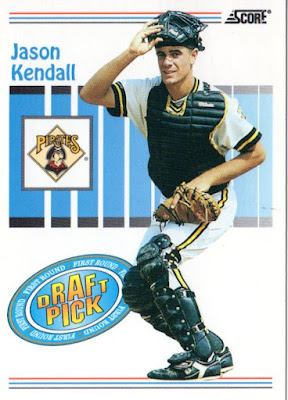 I don't remember much about 93 Score. 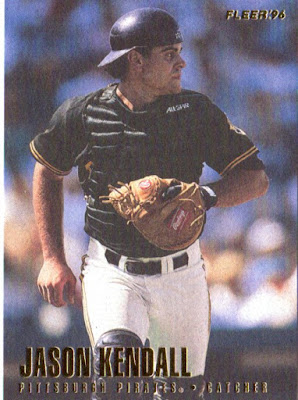 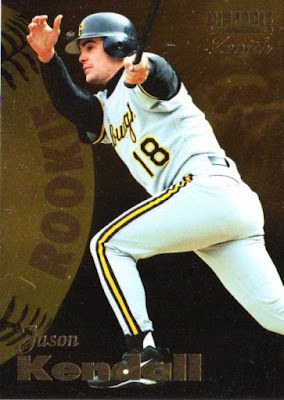 This is about as subtle of a Kendall photo you will find, but the gold background makes it all so fancy. 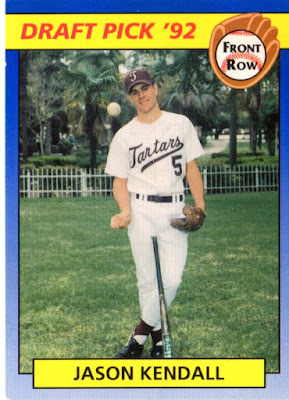 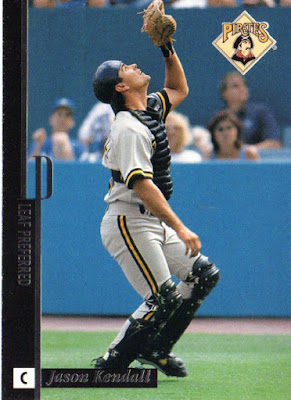 Kendall has to be among the leaders in cards featuring a catcher camping under a fly ball. 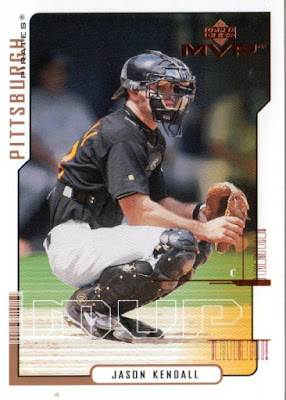 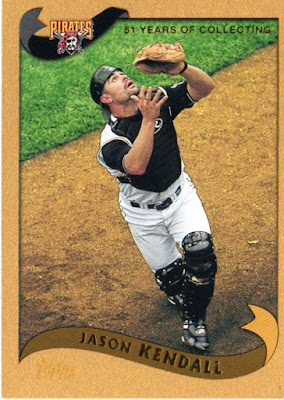 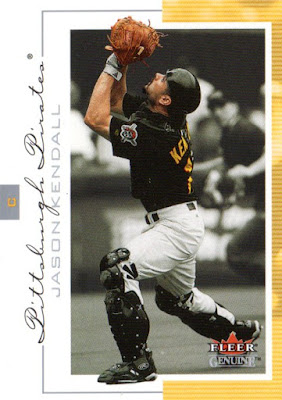 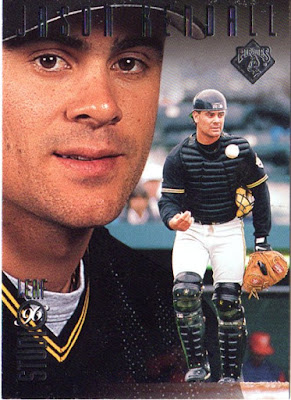 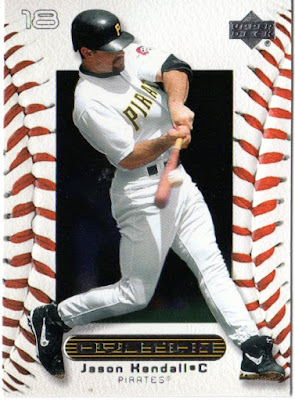 If you are not familiar with the Ovation set, yes it does feel like baseball stitching. 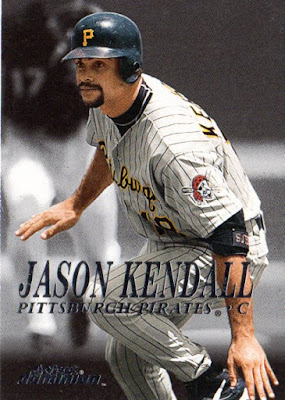 Finish off the Kendall portion of the show with the rarely seen Skybox Dominion set. 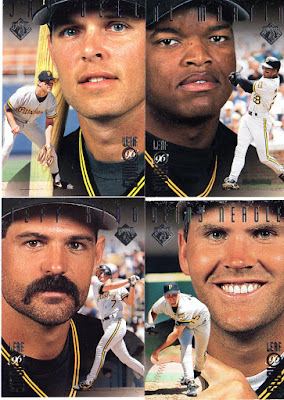 The mustache game was always strong with Jeff King. 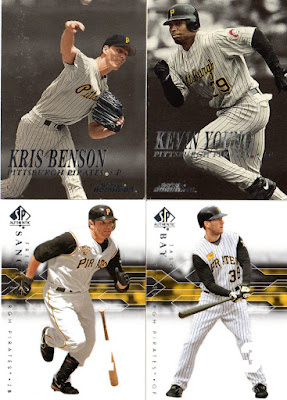 I always liked the look of SP Authentic, but the picture choices for the most part were super boring. 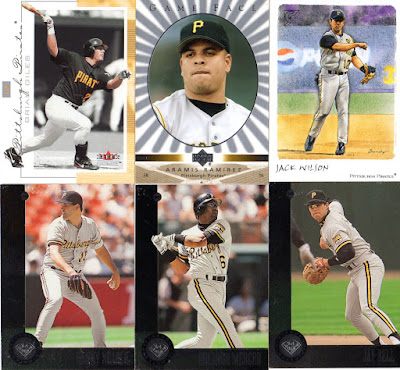 If I recall, Topps Gallery was one of the first high end sets I ever opened. I was a sucker for the Portrait cards I guess. 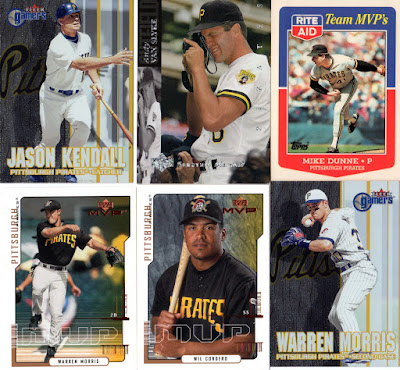 The Van Slyke UD card is pretty well known, but I still get a kick out of it every time I see it. 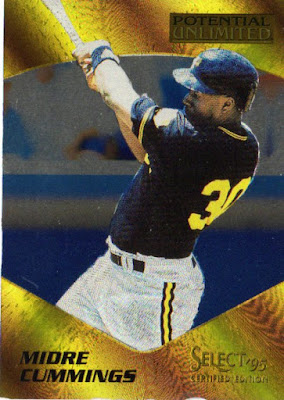 This card was probably my favorite of the whole bunch. Love the early parallel cards that were numbered.  Check out the back. 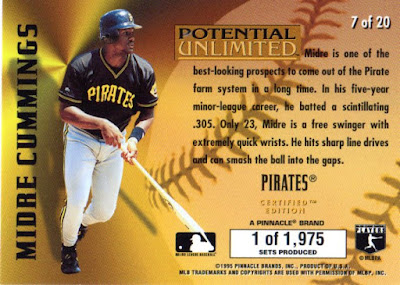 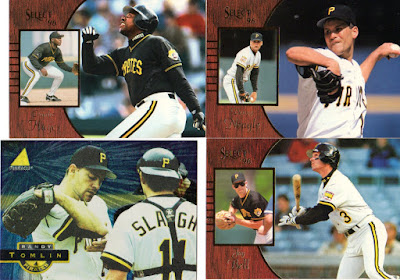 Some fancy Select and Pinnacle. My favorite is Charlie Hayes since he was a short stay Pirate and cards of him featured as a Bucco are limited.  His son is a high end prospect in the Pirates system today. Time to feel old. 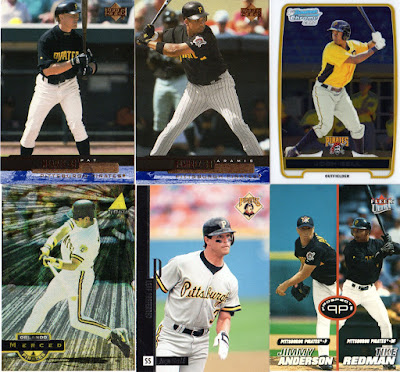 Nice refractor rookie of Pirate first baseman Josh Bell.  His defense is still a work in progress, but it will be fun to watch him hit since his approach is considered top notch. 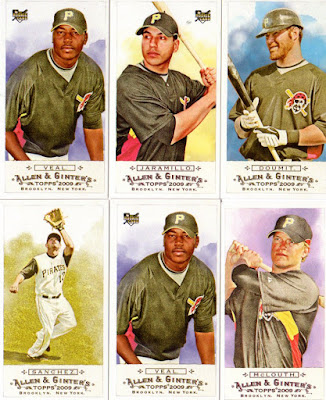 For whatever reason I always loved that Doumit mini. 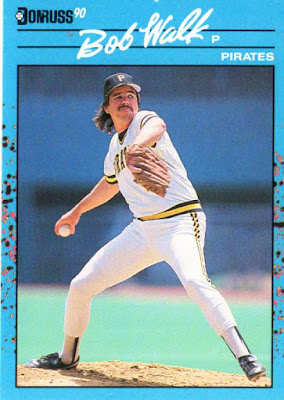 End with the legend. The hair was feathered and lethal that day.

Thanks so much John.  These were a blast to go through. So many sets that I haven't thought about in years.

Posted by BobWalkthePlank at 9:33 PM