I've been a frequent purchaser of redemption cards on the secondary market. They have always been a nice bargain if you are patient.  Usually by the time I make the purchase I already know the cards are live and being shipped out. For some reason sellers don't research it, or are just lazy to redeem them personally. Whatever the reason it almost always benefits the buyer.....almost always

I've only strayed from my method twice, and it was on the same card. Within a couple of months I purchased two redemptions for an Andrew McCutchen auto /49 from 2012 Panini Signature. I can't remember what I paid for them, but I'm thinking at that time it was around $15 to $25 a piece.  Shortly after that time Cutch developed into a bonafide superstar and for whatever reason  stopped signing Panini products.

These redemptions sat to the point where I knew they weren't going to be filled. Late this past fall I tried on two occasions to call Panini and sat on hold forever.  I left my contact information, but never received a call back. On to Twitter......

I sent a Tweet to Panini's main account and their Customer Service account and nothing happened. A retweet of that same Tweet finally got a response and a message to send an email to a specific customer service representative. Finally some help!

The customer service rep looked up my account and noticed I had four pending redemptions (2 Cutch autos, Paul O'neil auto, Kevin Jones auto). I already told the customer service agent that my favorite team was the Pirates, but was informed they would be unable to provide me enough in Pirate cards so I told them Penguins and Steelers. About 10 days later I received these cards. 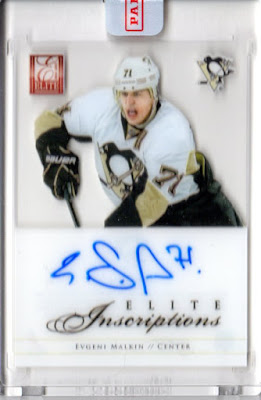 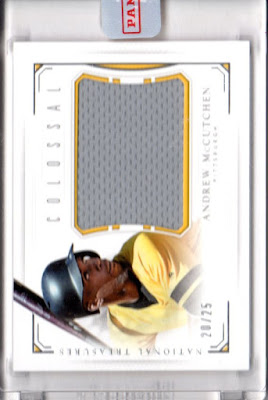 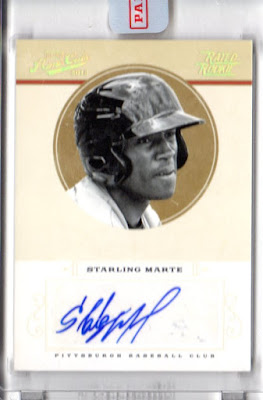 This Marte auto is numbered to 10! 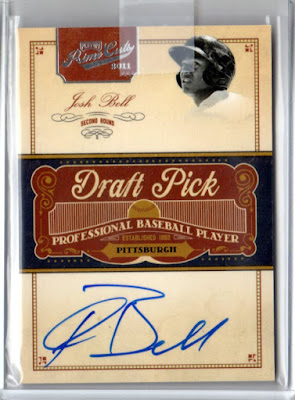 I was happy that Panini tried to give me cards that best suited my collection, they could have easily went the way of how Topps use to do things and give some sticker auto that had nothing to do with my collection. In Topps defense they have gotten away from that recently. Nice to hear some good stories about redemptions.

The next question is do I feel the cards are worthy replacements to the originals? I think so. I realize that I'm leaving some eBay $ value on the table, but I got four nice cards for the collection. I'm not one to get too hung up on $ value.

The biggest issue is the shear fact Panini was unable to get me a Cutch auto.  It is also a little aggravating that I know they have Cutch stickers on hand because he has some high end autos in the new National Treasure set. Between that fact and the hoops I had to jump through even get to someone who would handle my case leaves a bad taste. My hope is that they continue to improve the redemption process for other people down the road.


Posted by BobWalkthePlank at 10:05 PM