Today I decided to tackle a task I had been dreading for well over a month. I live in an area in which little competition exists for cable and Internet. I've been a hesitant Comcast customer my entire adult life. Fortunately I don't have any war stories about customer service issues as they have always shown up for appointments and helped via phone when I've needed them.  My only issue is the overall value of my service as prices have gone out of sight.

Many of my friends have long left the big cable companies in favor of streaming services. That is a logical solution for anyone that doesn't like live sports.  Unfortunately for me and my bank account I'm a huge sports fan.  So like most Icommitted to one of those 24 month plans that start out at a very reasonable rate and then shoot up a good bit in year 2. I was aware of this and was fine with it. I'm well past that committment today.

A couple months back I noticed my bill kept going up a few bucks here and there to the point where I called today. It seems that a new user fee was added to where the bill went up $15-20 a month.  I called Comcast and told them I wanted to downgrade my service and they quoted a rate I was happy with.  When I got home I noticed they had taken off more channels than what the new plan was supposed to have.  This is when it gets kind of weird.

When I got a new customer service person on the phone he said my account had been dropped to economy.  I explained to him that wasn't what I wanted and he ended up offering me a deal that was better than my current setup and roughly $50 cheaper.  I was mad and happy all at the same time. Mad that I wasted all this time on the phone, but happy that a mistake lead to someone who offered a better deal. I guess the moral of the story is to keep Comcast on the phone until they give you what you want. It was just so damn frustrating that the first customer service associate didn't offer the improved plan.  What a waste of time, but I guess it worked out for the best.  Now I can watch Game of Thrones and the NBA Network.

Now to a funny card story.

A couple days before Christmas I drove to the town I grew up in to visit a few friends and drink some good beer. The next morning I noticed I had an email from eBay that said congratulations you won this card. 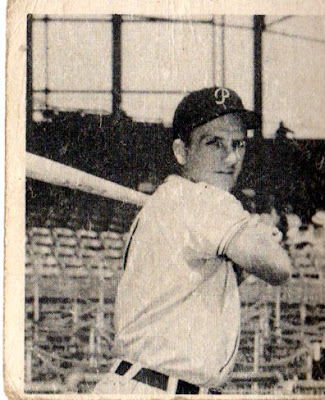 It was one of those oh shit moments thinking I may have done something stupid.  Fortunately this Kiner is far from mint and only cost me around $30.  I had a gift card at my disposal so it turned out to be only a few bucks.  At the time of ordering I must have been more coherent and then drank enough good beer to forget the auction win. Friends don't let friends have an imperial stout tasting and order vintage baseball on eBay!

Thanks for reading!
Posted by BobWalkthePlank at 9:45 PM