My daughter decided to be a complete crazy person tonight so I'm getting a late start. 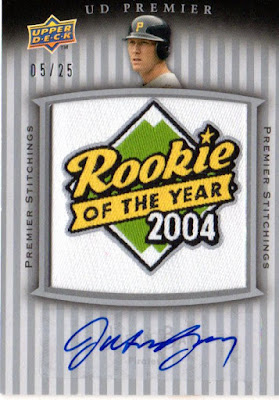 This card is a not so subtle reminder that Bay won Rookie of the Year in 2004....

This cost me a shade over $10 which is high for a Bay auto. Makes me think that a few other Bay collectors might have been taking a look at this one. Further proof that these are hard to find. All five of us must have been looking at the same card :)

Hopefully the luck continues with finding Bay's in the coming weeks.
Posted by BobWalkthePlank at 11:09 PM