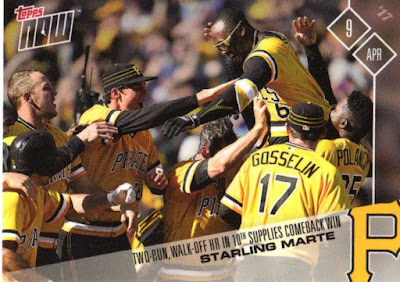 This Marte has been the only Pirate NOW card at this point of the season. Love any card featuring the Buccos in their 79 Sunday jerseys.  I was watching the game when this happened so I kind of figured this moment would be made into a card since Topps absolutely loves walk off cards. They seriously make every walk off card a NOW card.

Speaking of Marte, I was pretty upset about his suspension. The Pirates were considered a fringe contender at the beginning of the year. That means they have little margin for error. Losing arguably your most important player for the most selfish of reasons is hard to take. This could have a trickle down effect if the Buccos are out of the playoff hunt around deadline time. Really no one is safe from being traded minus Polanco and Taillon. I hope they can stay afloat.

I was a little disappointed that Topps didn't make a NOW card for Dovydas Neverausks. He made his debut last night becoming the first Lithuanian born player to play in  the majors.  He was sent back tonight to make way for Gift Ngoepe who became the first player from Africa to play in the majors. Pretty cool stuff.  Maybe we will get a dual card tomorrow, although I'm sure someone will hit a walk off single.

Thanks for reading.
Posted by BobWalkthePlank at 10:49 PM