Bo Knows......How to Destroy My Scanner

Last month Bo from Baseball Cards Come to Life contacted me about some Pirate cards I might be interested in.  Of course I rarely ever say no to a trade so Bo sent them my way along with a lot of All Star cards I won in his version of the Big Fun Game. 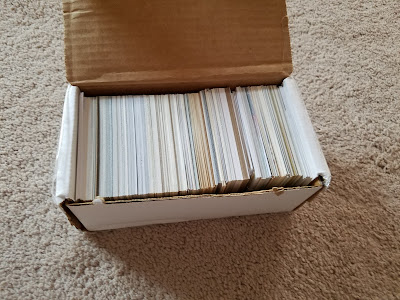 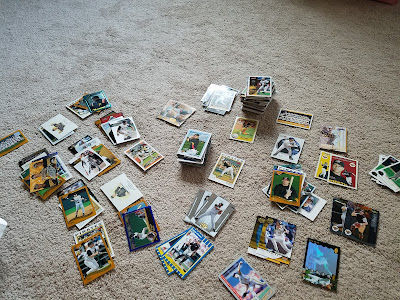 The easiest way to display my favorites were to put them in player order.  Most of the cards I feature are from the early 2000's.  So many great forgotten sets! Buckle in and enjoy the scans. 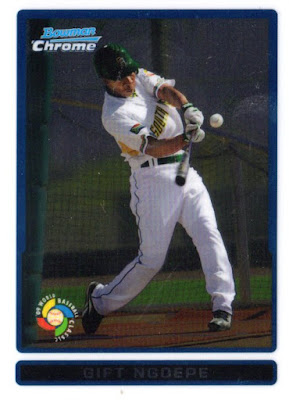 Kind of hard to see, but this is a WBC Chrome card of Gift Ngoepe.  Gift became the first African born player to make it to the major leagues this year. 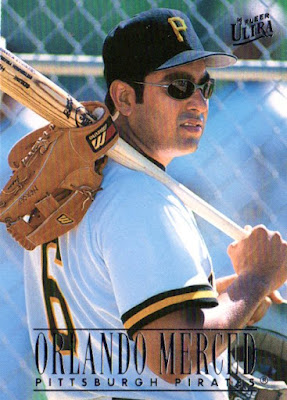 Plenty more Jack Wilson below, but I just wanted to feature a Fleer Legacy card. I love these obscure sets. 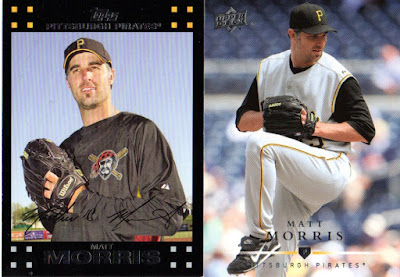 Matt Morris was horrible for the Buccos, but I love getting some short term guys. 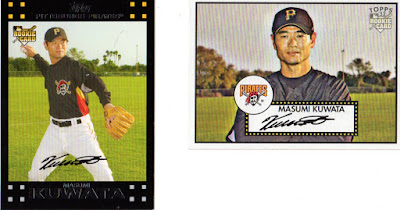 Kuwata made his major league debut with the Pirates in 2007 as a 39 year old rookie.  He became the first Japanese player in Pirates history.  The stay was short as he was designated for assignment two months later.  The Pirates tried to get him to stay on as a coach but he declined and went back to Japan. 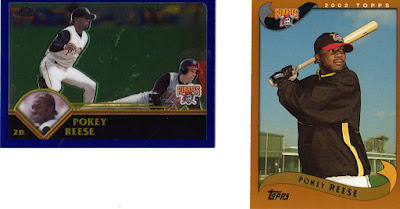 Pokey was one of the better defenders in the early 2000's but his hitting left something to be desired.

Craig Wilson was a personal favorite during his Pittsburgh days. 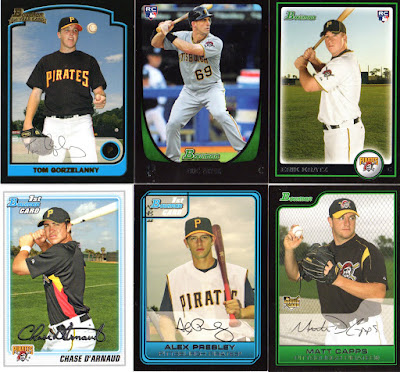 Bo gave me a ton of Bowman rookies.  Here is a sample of guys that made it to Pittsburgh.

Upper Deck MVP was a set I purchased a lot.  UD had some nice sets for those on a strict budget between MVP and Collectors Choice. 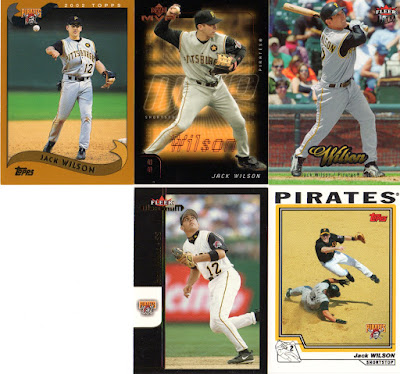 I think Jack Wilson might still be the longest tenured Pirates in the PNC park era.  Counting minor league time Cutch probably has him since Jack was a Cardinals prospect. 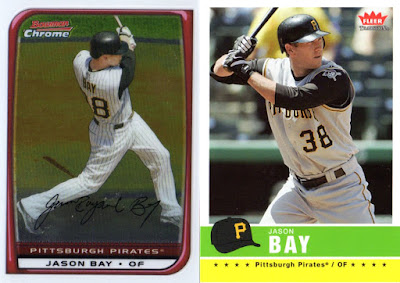 Fleer Tradition was another fun set that was affordable. 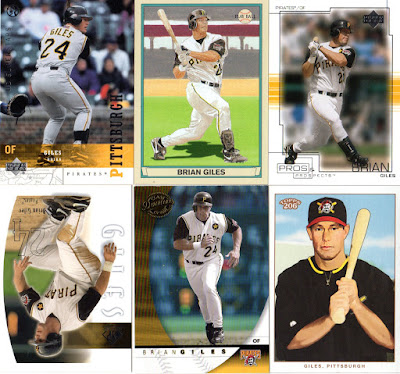 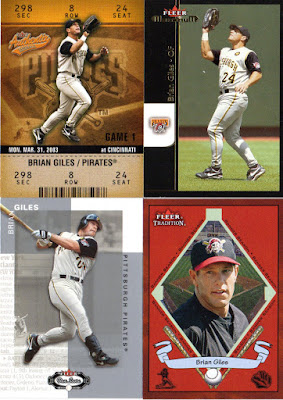 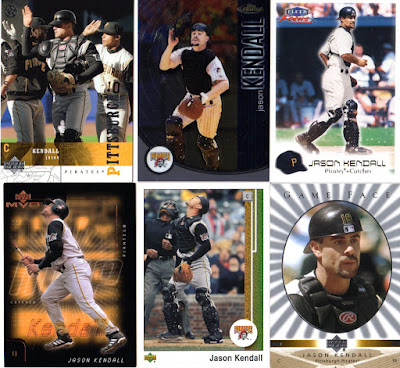 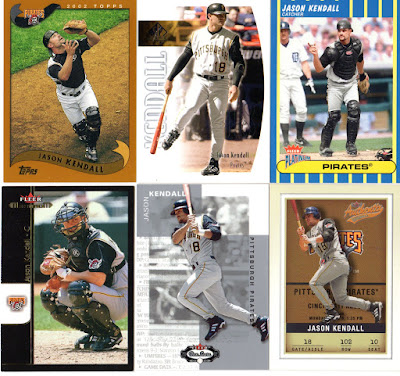 I think my favorite is the UD celebrating the win card.

Next up is Aramis Ramirez.  Surprisingly he beat out Giles and Kendall for the most unique cards in the box. 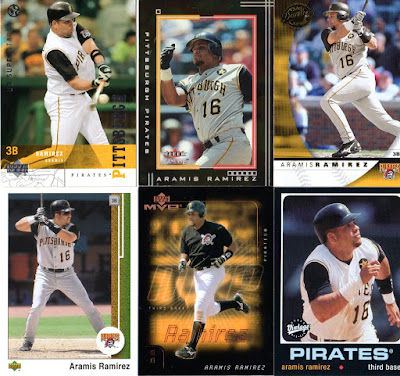 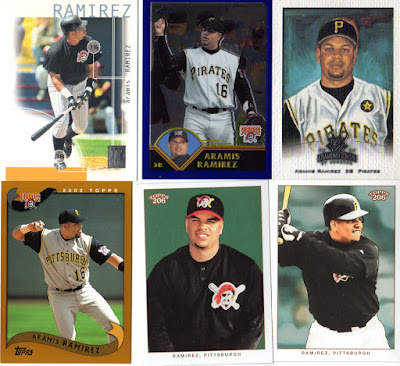 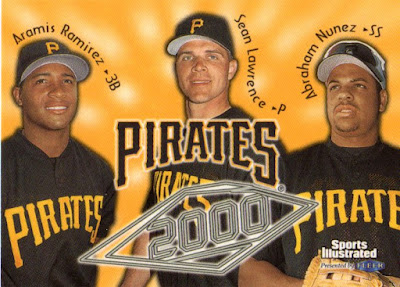 I scanned the Sports Illustrated card separately because Nunez and Ramirez are listed wrong. I've always been partial to the canvas Diamond Kings card so that is my choice of best of the bunch. 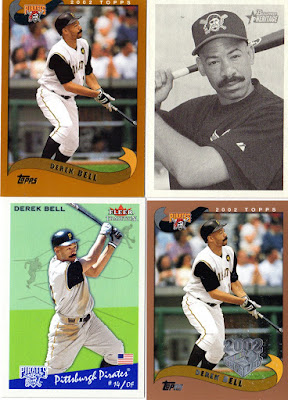 4 unique cards of Mr. Operation Shutdown himself Derek Bell.  He was a real life Pirate as he basically took the teams money and vanished without a trace.

Dennys!!!! My brother and I use to beg to eat at Dennys so we could get cards.  We would always fight over the Pirates. 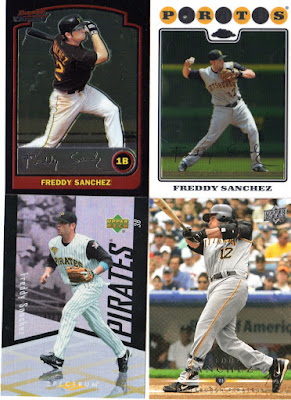 Freddy was great during his stint as a Pirate. He has a decent amount of cardboard representing his time in Pittsburgh, but it always felt like he should have more.

I'm a sucker for a good managers card.  Lloyd Mclendon is probably most remembered for a blowup he had during a game in which he took a base back to the dugout.  That should be a card. 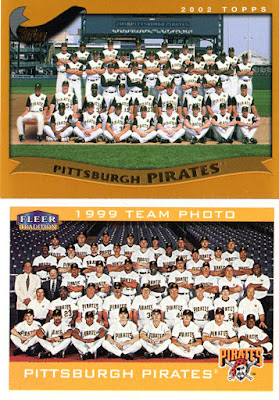 A good game for Pirates fans is to see who can name the most players in this picture.  It is pretty hard.

Here are my favorite cards from the Big Fun Game. 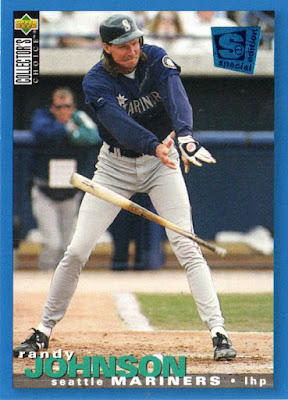 This card has been featured on the blogs before, but it is always worth showing. Randy Johnson batting was an event worth documenting. 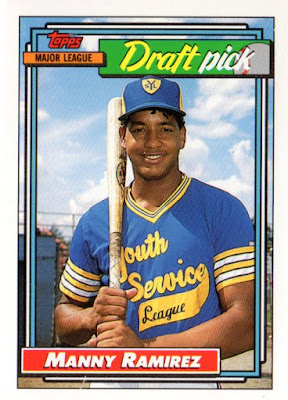 One of the more unique players in recent memory.  Such a great looking card.


Thanks for all the great cards Bo. I just pulled the trigger on a COMC order that has some cards for you as a thank you for the Pirates lot and the Big Fun Game.  This was a ton of fun to sort through.

Thanks for reading!
Posted by BobWalkthePlank at 6:52 PM