Please Make Fun of me

The beauty about collecting cards is that no wrong way exists. Most are just bound by finances and time. People that worry about the way others collect have their priorities messed up. Sure it gets annoying seeing people on Twitter who PC Mike Trout, Bryce Harper and Steph Curry at the same time, but too each his own.  It's your money and if you want to collect the flavor of the week so be it. The unfollow button is just a click away if it bothers you.

My collecting style is all about variety. I like to jump set from set trying to accumulate cards that interest me. Every so often I go back and look at cards I've accumulated and one will pop out that leaves me with that "what the hell was I thinking" feeling.

Such was the case with this card..... 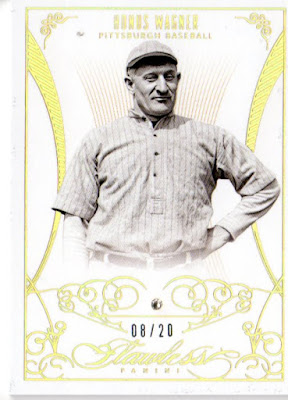 I'm probably one of the least critical people when it comes to card design. I often look past aesthetics if it is a Pirate that is rarely featured on a card or from an obscure set.  Sometimes a crazy look is what draws me to a set (like any 90's insert). These Flawless diamond cards are just too much for me.

Maybe I had too many bourbon barrel stouts one evening and was trying to shop for myself and my wife at the same time.  /chugs beer "pretty diamonds....oh this Honus Wagner card is nice too." I remember finally getting this card in the mail and just shaking my head.  Usually I would showoff a unique Honus Wagner card, but the buyers remorse was just too much for me.  It had to be relegated to my basement for 3 years.

Now I can at least look at this card more from a comical point of view.  Maybe even as more time passes I'll view it like some diecut, lightning bolt/hologrammed card from Pacific. Who knows, if times get tough I can pawn the actual diamond for the .37 it is likely worth.  Someday when I die my daughter will look through my cards and realize that the reason she couldn't go to a nice private college was that Dad bought cards with diamonds in it.  Sorry honey, hope you enjoyed your time at University of Northwest Southeast Delaware Trucker Tech.

Alright guys let me have it.

Posted by BobWalkthePlank at 1:12 PM