Brewing Up a Walker 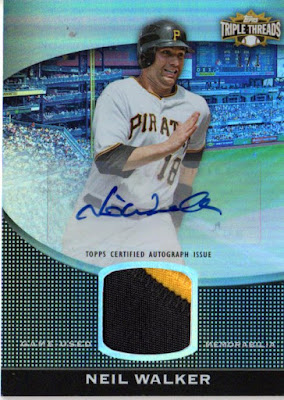 A recently acquired Neil Walker card from a six year old set became topical again! The former Pirate who grew up in Pittsburgh (announcers will remind you at least 78 times during broadcast) recently was traded from the Mets to the Brewers. The Pittsburgh media overrated him a good bit, but he was/is a very good offensive second baseman when healthy. I suspect he will be a nice pickup for the Brewers who essentially just took on the remaining portion of his salary.  The Pirates are playing the Brew Crew this afternoon.

As for the card itself this was a nice find. For anyone who collects Pirate cards, 2011 Triple Threads was a big deal.  It was one of the first high end sets to feature some of the "other guys" not named McCutchen.  It featured the likes of Walker, Jose Tabata, Pedro Alvarez and Garrett Jones. It was and still is one of my favorite sets to buy because of all the variety.

Triple Threads is one of the rare sets that I actually like the regular jersey/patch cards better than the autos. The sticker seems to be more of an eye sore than usual on this one. Having the placement right on the torso is less than ideal.  With that being said I still highly desired the card because it adds a nice finishing touch to all the Walker's I own from this set.

Posted by BobWalkthePlank at 7:17 PM