Hey, its an actual post about cards. I feel like in the summer this blog turns into a travel/beer blog, but I guess it helps keep things fresh. Hard to drum up a lot of excitement for a new Jason Bay addition. Guess it proves I'm an actual person that doesn't sit at home thumbing through junk wax cards 8 hours a day. By the way that is not a bad thing, I just like to get out of the house. If my wife would let me I would happily thumb through junk wax 18 hours a day!

A couple weeks back Julie from A Cracked Bat sent me a huge box of cards with specific instructions on the pattern to open.  The first team bag labeled #1 was the jumbo Extra Bases cards I showcased last week.  The rest of the cards are in order of how they appeared in team bags labeled #2-7.  Tons of cool stuff here. 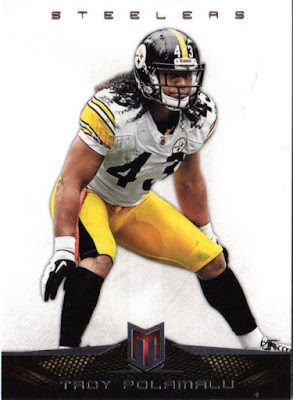 When I was actively collecting Steelers my two favorite players to collect were Hines Ward and Troy Polamalu.  Always cool to receive cards of one of the better defensive players in team history which is saying something considering the teams history. 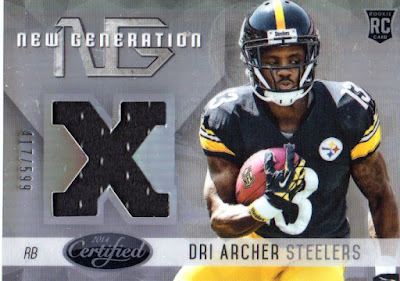 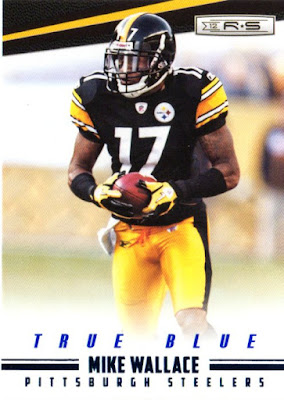 I liked watching Wallace as a Steeler because he seemed to only run go routes.  He was pretty much the "down and B" play on Tecmo Bowl.

The Platinum Roethlisberger is one of the more shiny cards I've seen. 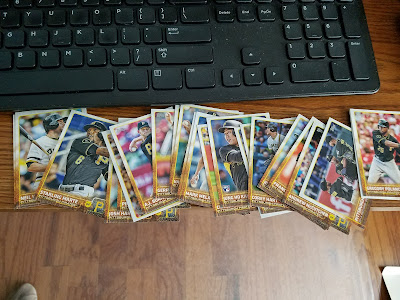 One of the team bags was stuffed to the gills with Topps Mini cards. 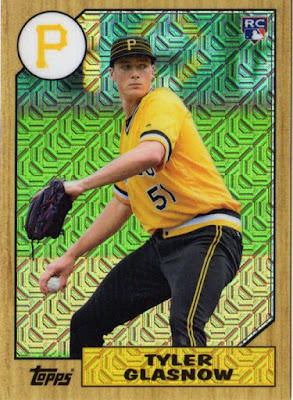 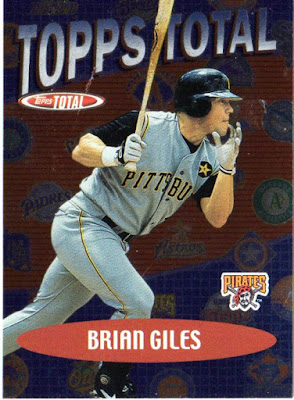 It seems like I talk about Topps Total a lot on my blog.  I still think the set would have a place as a retail only option.  That way Topps wouldn't have to worry about the case busters not getting an Aaron Judge auto. 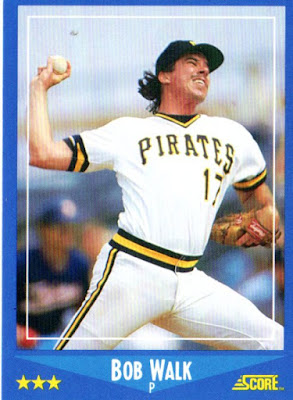 Julie just throws around cards worth $5000 like a boss. 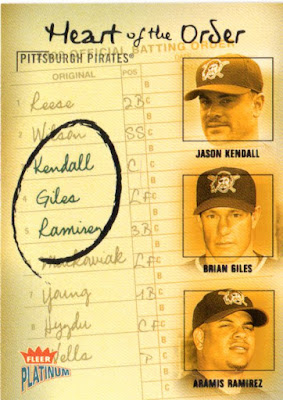 Not exactly murderers row, but I do like this card. The sun looks to be in Aramis Ramirez's eyes.

I know Pirate fans get sick of their stomach when they think of the Jose Bautista trade.  While it was completely unnecessary who knows if he would have actually broken out.  Hindsight is 20/20 I guess. 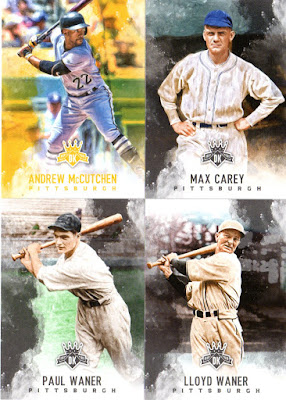 License or not, DK will always be a favorite of mine.

Triple Play was a staple of my childhood. 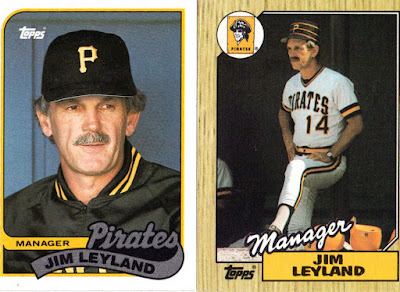 Jim Leyland smoking in the dugout was also a staple of my childhood.  I'm such a sucker for manager cards. 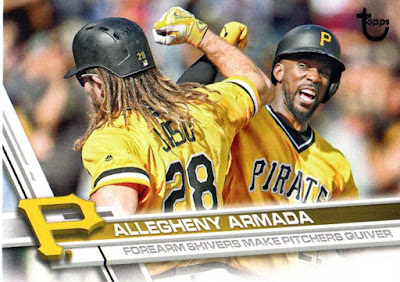 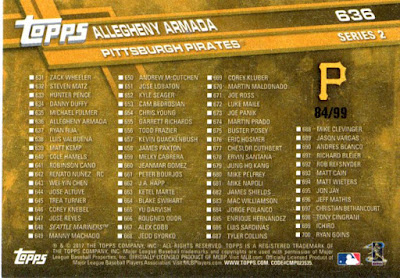 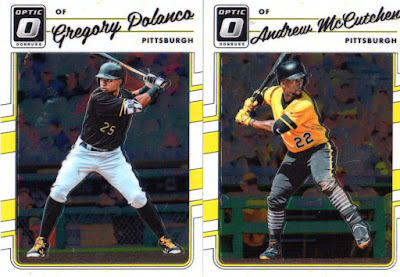 Optic cards are more attractive than the normal Donruss base so that is saying something. 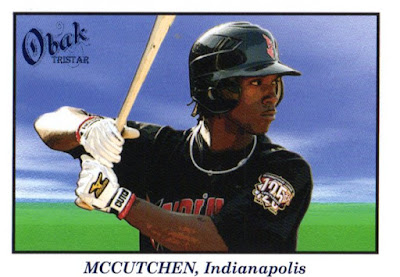 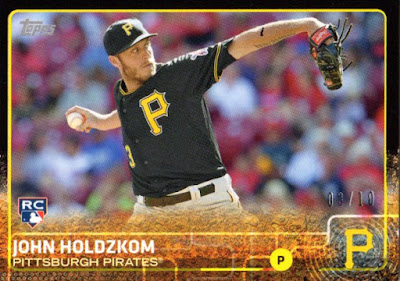 Kind of hard to see but this is numbered out of /10.  Holdzkom kind of pulled the Natural with the Bucs as he came out of nowhere to help us make a big playoff push and then disappeared. 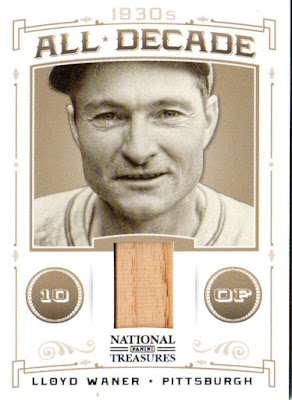 This is a super cool Little Poison bat card! Panini has created a ton of cool new cards of the Waner brothers recently.  Love that they focus on a lot of  pre war players. 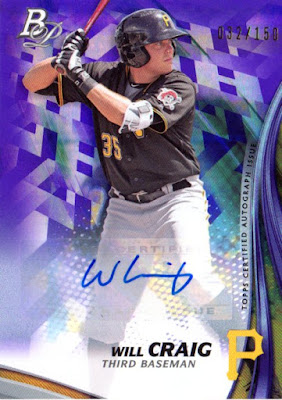 Former Black Bear Will Craig! He has had a much better season this year so I'm hoping he may get a late move to AA this year. 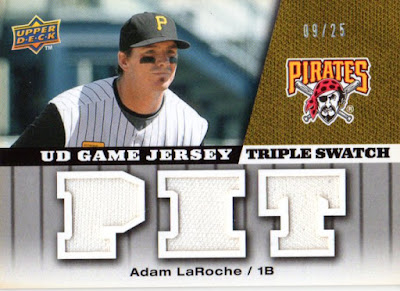 This card says Adam LaRoche, but that is most definitely his brother Andy. 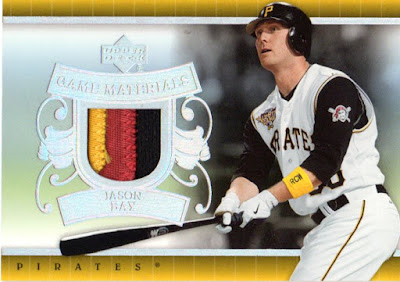 I joked at the beginning of this post about always showing Jason Bay cards....

This is a super cool patch featuring the rare red jersey worn by the Pirates in the mid 2000's.

Some high end base of Cutch! 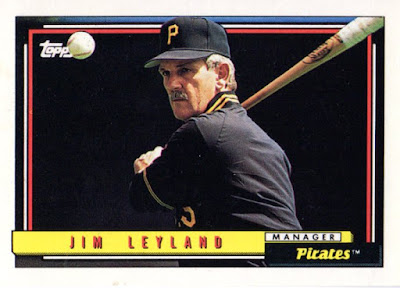 Pretty much a perfect card. 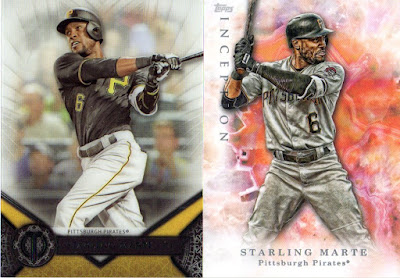 I'm a fan of the crazy looking Inception base cards. 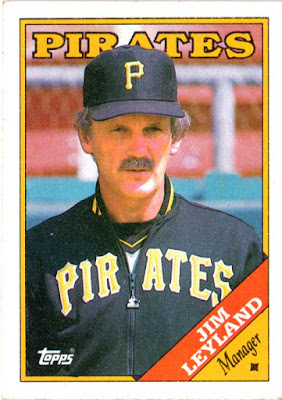 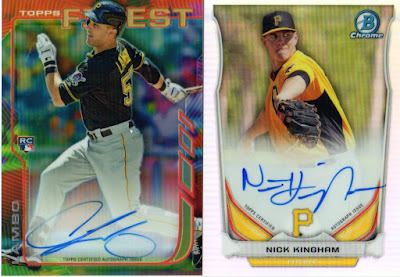 Andrew Lambo kind of pulled the Henry Owens by being in every set for a while without really deserving to be. Man, I wish Finest was just a little cheaper. I really love that set.

It looks like Nick Kingham was practicing writing his name in Japanese.

Thanks for all the great cards Julie.  These were a blast to sort through.

Thanks for reading!
Posted by BobWalkthePlank at 7:18 PM