1997 Flair Showcase is confusing as shit, but has tons of cool cards in it.  At one time the parallels were fairly easy to find, but I've noticed an uptick in interest the last few years on eBay.  Makes sense as interest in cards from the mid to late 90's has gone up across the board.  Thankfully the Pirates only have a few lower end type of players that got featured in this set.  So for me a card that would have normally sold for .99 might be $3.  For a Griffey or Jeter collector it might be $20 to $80.

Where Showcase gets confusing is in the "Rows" and "Sections." If you want to learn more about the set here is a link.  Basically the whole idea is that each player in the 180 set had 3 different levels that had different designs.  That is where the "rows" come in.  The "sections" were parallels offsets of the rows.  See what I mean about confusing.....

A couple weeks back I found a seller that was breaking up an entire Showcase Legacy Collection parallel set.  Kudos to whomever put that together as these are all /100. The seller at the time had the Jason Kendall, Al Martin and Jose Guillen for the Pirates.  I ended up with Guillen and Martin. 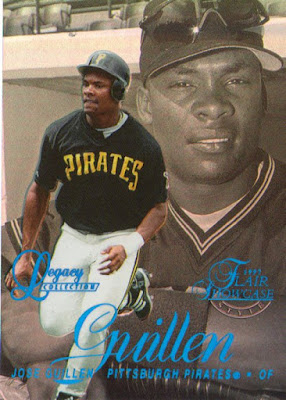 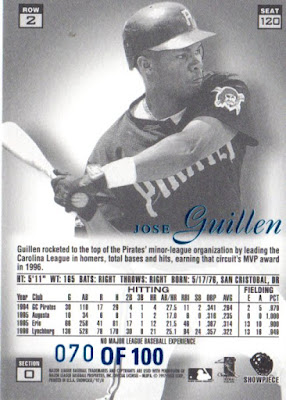 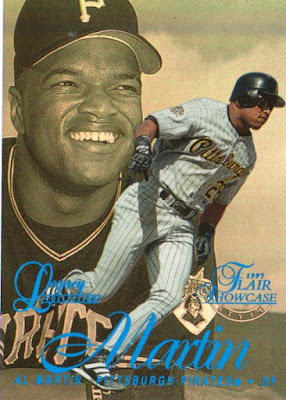 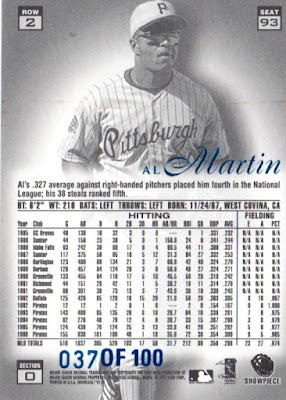 Quick side note, 1997 Flair Showcase was the first set to have a true 1/1 parallel called "Masterpieces."