When the Pirates moved their short season NYPL affiliate to Morgantown I decided that I would collect all cards that showcase a player in the Black Bears uniform.  This has been a fun process as only three players have received cards in the teams two year existence (Kevin Newman, Kevin Kramer and Will Craig).  All the cards are from Topps Pro Debut.  I've been hoping that Heritage Minors would make a Black Bears card, but nothing yet.

Since only a few players have been represented and Pro Debut is a relatively inexpensive set, I've been able to focus on finding parallels.  Here is a link to a page I started that shows my progress. My most recent purchases are probably the most unique.

I found most of the Will Craig parallels quickly.  Besides the 1/1's I had assumed I was done.  Most of my focus had been trying to find the guys that were in the 2016 Pro Debut set.  Then I discovered these. 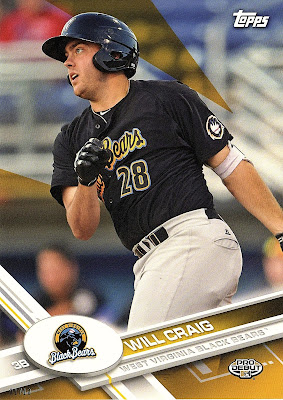 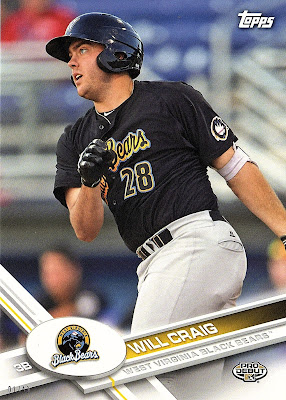 I knew about the jumbo 5x7 cards, but hadn't realized that Craig got the big card treatment by Topps. Both of these popped up within a few weeks of each other and each time I paid more in shipping than the actual card.  Craig's prospect status really took a hit after a bad year last year so his cards have been bottoming out.  Obviously I want him to do well, but the savings has been nice for my Black Bears project.

Do I like the jumbo cards....not really. They look fine and dandy, but they are not the easiest to protect and store. Fortunately each seller provided nice top loaders to protect the card.  I'll probably slide them in a big binder page with the rest of my Black Bears collection.

I'm sure cards like these drive player collectors nuts.

I'm heading to the WVU/Kentucky basketball game tonight.  Should be a fun atmosphere.  College Gameday was here this morning and we have the national broadcast tonight.

Posted by BobWalkthePlank at 1:29 PM