You Loathe I Love

I'm caught up on trade posts (minus a recent lost collector package). Going to be putting some effort into getting return packages out over the next couple of weeks.  I'm sitting on some nice cards for many of you, but everything got put on hiatus while my main office computer was out of order.  Now that I'm back in business it is time to get to work.  I have Sunday earmarked as trade day. I've been active in clearing clutter around my workspace so I'm feeling motivated!

While new purchases are always a little slower coming in this time a year I did manage to pick up a few nice cards over the last month. 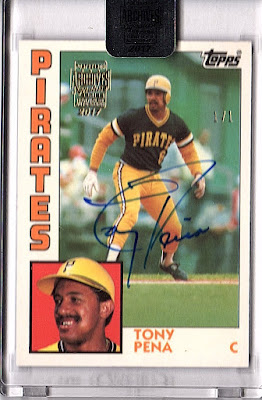 This set wasn't well received from what I've read online. I guess if you are looking for Derek Jeter and get Tony Womack it can leave you a little salty. Personally if you are opening something that has only one card, you're kind of playing cardboard roulette. Has a one card box ever been well received?

For me this set had the best Pirate auto list I've seen in quite some time. The big one is that Manny Sanguillen signed his first certified autos.  I've yet to secure one of those as I think other Pirate collectors are sharing my excitement. They are selling well on the secondary market.

The big get for me was this Tony Pena 1/1.  He has had a few Pirate autos in the past, but Archives had the players sign some great cards.  Hope to get a few variations of the former Pirate backstop. 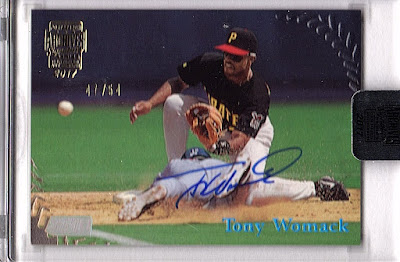 2017 Signature Archives Postseason Tony Womack /54
For those who did get Tony Womack and spitefully put them online, I was more than happy to pounce. These are selling for under $5 shipped on most auctions.

Tim Wakefield also has his first Pirate certified auto in the set.  While I knew autos featuring him in the Red Sox uniform would sell well, I was caught off guard how high Pirate versions were selling.  I've yet to find one at a price I feel comfortable with, but continue to put a considerable amount of effort in finding one at a reasonable price.  Hopefully at some point down the road I'll be able to share a Sanguillen and Wakefield!

Thanks for reading.  Remember...Friends don't let friends open one card boxes.  That is unless they get Pirate cards they want to sell me super cheap on eBay!


Posted by BobWalkthePlank at 8:58 PM