Hanging By a Thread

The only high end box I've ever opened was  Topps Triple Threads. While the box produced a few nice cards I really didn't enjoy the experience and vowed never to do it again.   My box busting days are behind me minus my breaks with Kevin and Brian. I also have a stash of lower end boxes if the urge were to strike at anytime.

On eBay I've noticed that many of the Triple Threads cards seem to be selling cheaper than in previous years.  Topps has a lot of premium sets on the market so I'm guessing breakers are being choosy on what they want to open.  You may want to take some time an look at some auctions.  Some bigger names are selling at what seems to be good deals.

Recently a seller that I follow listed a bunch of Triple Threads cards that were not getting much bidding action.  I pounced at the chance and picked up a couple Pirate autos and a little trade bait. 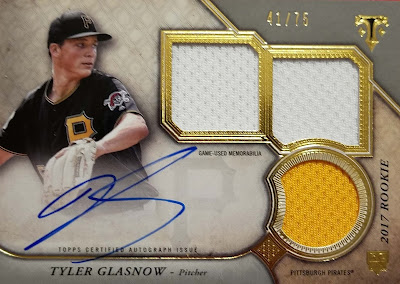 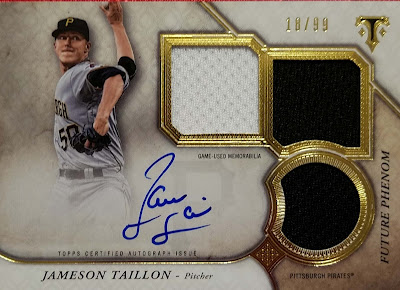 The Glasnow and Taillon cost me about $6 combined.  Probably not the numbers you are looking for opening a box like Triple Threads.  What little focus I've had on 2017 has been pretty much on Glasnow.  Since he has struggled so much at the MLB level his cards have bottomed out big time.  The Taillon was a nice bonus to take advantage of combined shipping.

Posted by BobWalkthePlank at 7:53 PM