Dennis Brings Me Back to Life

This is my first post on my brand new computer!  In hindsight I wish I wouldn't have spent as much time trying to fix my old one.  It was one of those bare bones Dell computers. While I don't need top of the line, I was probably doing more on the computer than it was built to deal with.  Also, I don't think it handled the switch to Windows 10 very well.  I read about all kinds of issues concerning glitches when people tried to update.  Ultimately that may have been the deathblow.

After finding out that I was in the market for a new computer my pal Dennis  (Too Many Verlanders) gave me some great pointers on what I should be looking for with the new computer purchase. Ultimately my new machine is much more equipped to handle the rigors of 8 million Bob Walk scans.

To break in the new machine I thought it be appropriate to showcase cards from Dennis.  These were part of a package sent before Christmas.  I made note of the main event card already, but this package was full of fantastic cards. 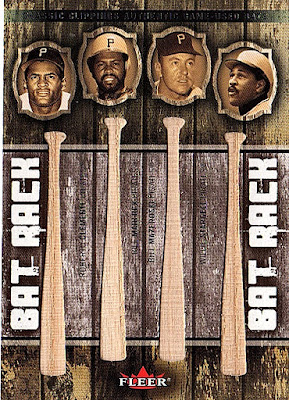 This is probably the coolest bat relic card you will ever find.  You could easily make a case for this card being the main event, but I gave the edge to the West auto since he was featured in the WVU uniform. Since Dennis is a big Michigan collector I figured he would understand. 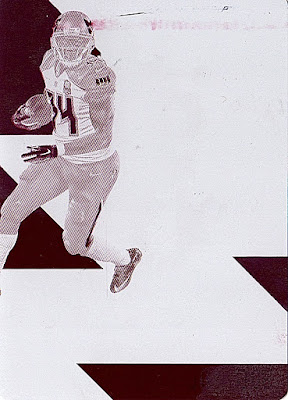 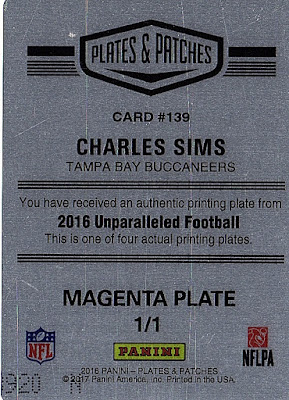 Over the years I feel like Dennis has sent me about 9000 printing plates. While they never scan well, I do like that many of the Panini plates have nicer backs to them. 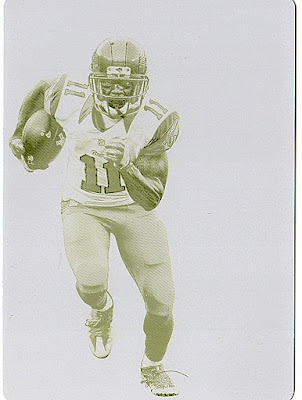 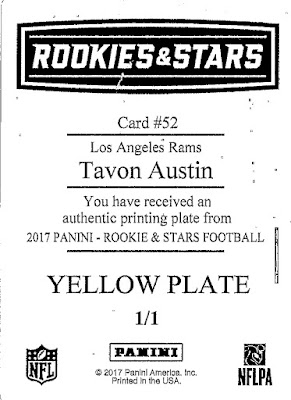 I'm really not sure what is going to happen to Tavon Austin. The Rams offense really took back off this year, but Tavon's role was non existent. Obviously a trade would be best, but the contract probably makes it hard to get rid of him. My dream is that he will one day become a Patriot as they have such a great track record of utilizing small wideouts. 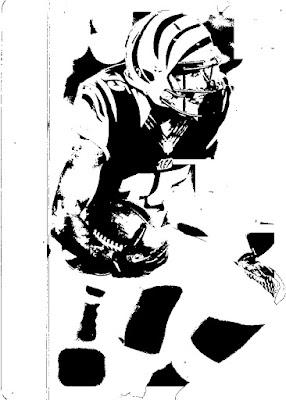 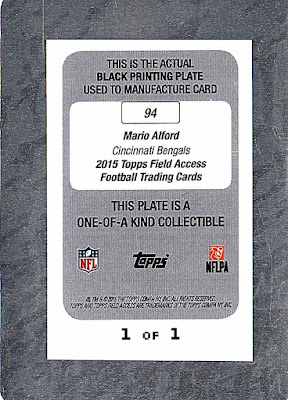 Probably should just get in the habit of taking cell phone scans of Topps plates.  Seems to work best with those and chrome cards. 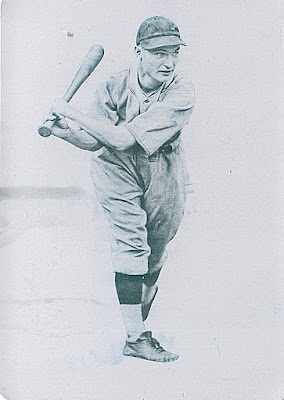 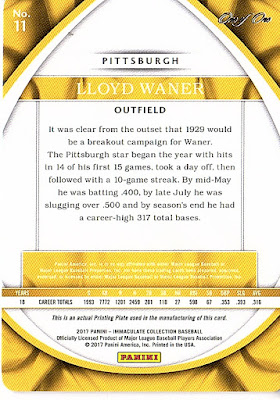 Plates from Immaculate are crazy thick, but you can get better scans.  I think this gets my vote as my favorite plate of the bunch.  A couple years back Panini went wild in producing cards of the Waner brothers. It was nice to see more of Lloyd (Little Poison) Waner as his brother Paul seemed to get the most love.

It wouldn't be a trade with Dennis without a ton of WVU cards. 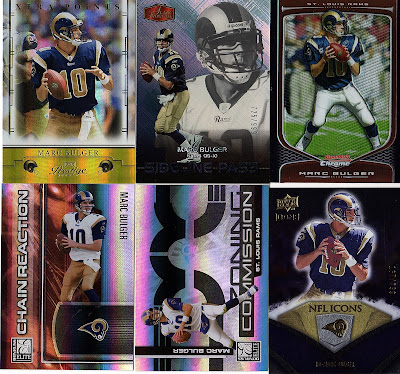 A great assortment of Bulger cards.  It was cool to see Marc carve out a nice NFL career after a great college career. 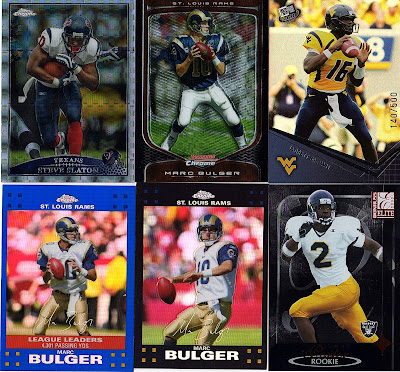 Licensed Press Pass cards are among my favorite of all time. Some of those early sets had the nicest base cards and autos you will find featuring the college uniforms. 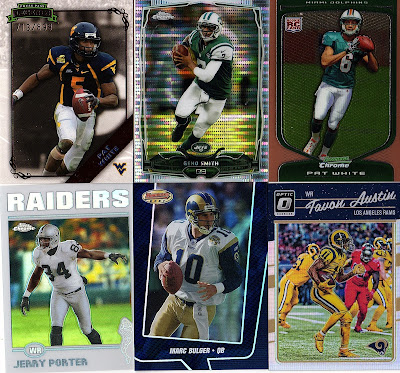 Jerry Porter is kind of tough guy to collect.  Many of his early autos and relics were right at the beginning of the "hit" boom.  Some of those sets now are among the most sought after thus causing low end players like Porter to be more expensive than you would normally think. 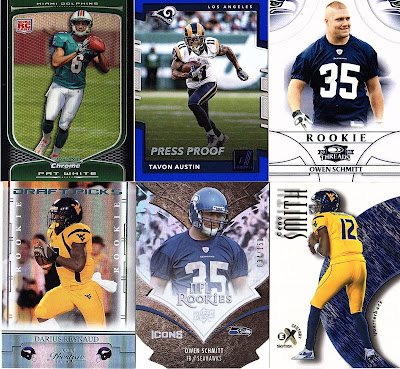 I'm still hoping WVU retires Pat White's number at some point.  He played in 4 bowl games and won them all. Two of those were BCS games against George and Oklahoma. 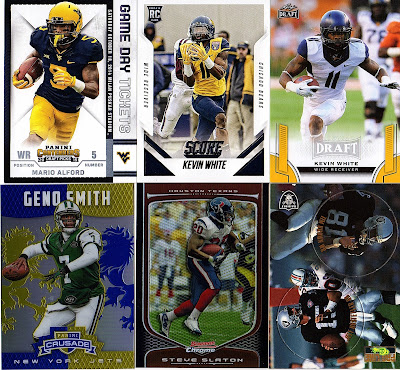 So many great WVU cards.  You really found quite the assortment Dennis. 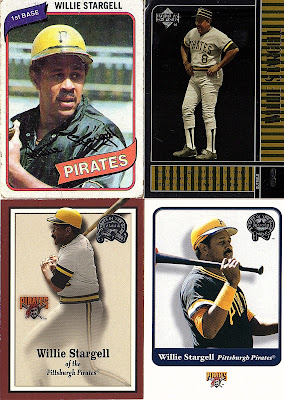 GOTG is just such a top notch set. The 2001 version is my favorite! 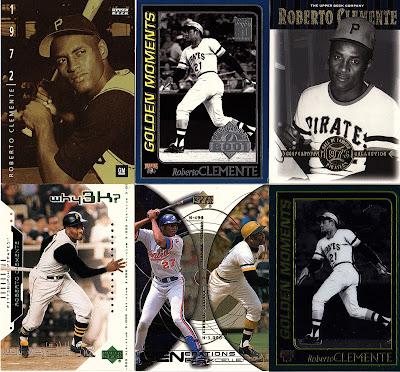 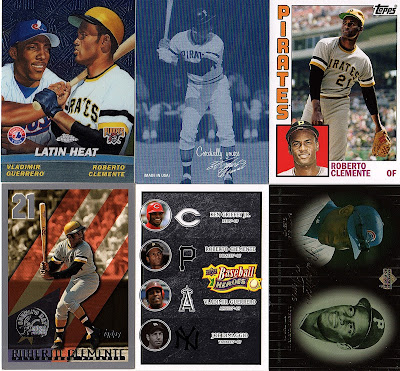 So many Clemente's! I love the three that feature Roberto and Vlad Guerrero. 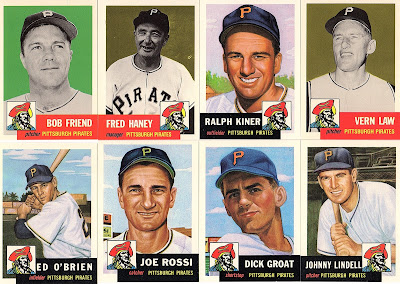 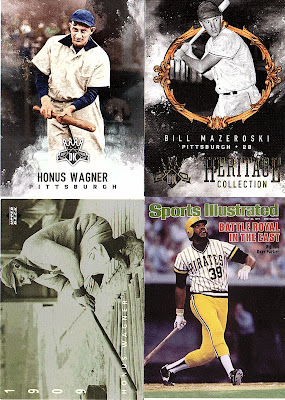 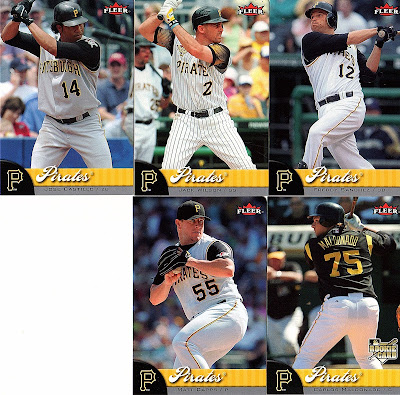 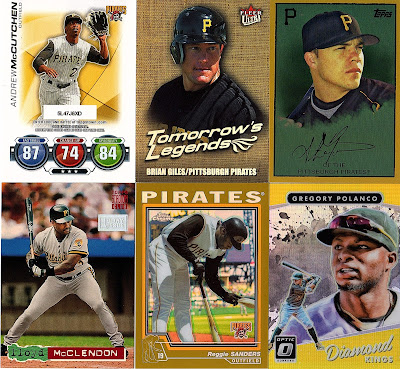 Love the Reggie Sanders Pirate cards.  He only has a few out there and they are not the easiest to find. Some of the low numbered parallels go for big bucks.

Thanks for all the great cards Dennis.  Sorry for holding onto these for so long, but this amount would not have been phone to scan with a cell phone.  I'll be sure to hit you up with some good stuff soon. Have a few low end things, but I definitely need to work on some big ticket items.

Thanks for reading!
Posted by BobWalkthePlank at 7:32 PM