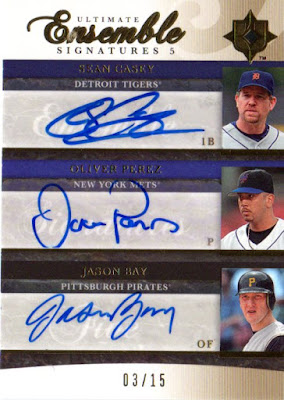 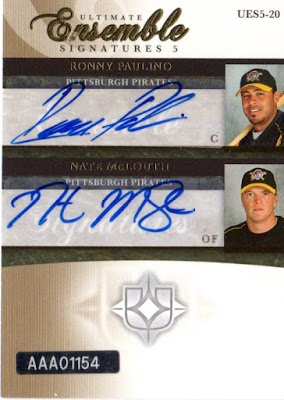 I have a few variations of this card, but this combo is the newest to my collection. Boy does this card have a lot going on. Each guy has an interesting story.

Sean Casey is from the Pittsburgh area, but he didn't stay long as he was traded to Detroit during the 2006 season. His Pirate career was pretty uneventful, but his trade was unpopular do to his hometown status. It didn't really bother me that much as his best years were behind him. That auto is pretty wild too.

Perez came on quick for the Pirates and flamed out just as quick. The Pirates released him and he was picked up by the Mets. He regained some of his early magic in 2007 with Mets and parlayed that into a long term contract. Unfortunately for the Mets his production fell right back off and the contract immediately turned bad. After the Mets Perez balanced around for a while, but has recently reinvented himself as a reliever.

I talk about Jason Bay all the time. He is one of my all time favorites and my main reason for buying this card.

Ronny Paulino looked like he was going to be a productive major league catcher after putting up better than average numbers in 2006. During the 2007 his defense began the suffer and the Pirates pretty much washed their hands of him. He balanced around several years but hasn't seen MLB action in almost three years.

Nate Mclouth wasn't much of a prospect for the Pirates but he produced at every level of the minor leagues and forced his way onto the big league club. He was given a full time gig in 2008 and had a big year which included an All Star appearance and a gold glove. In 2009 the Pirates shocked their fan base by trading Mclouth to the Braves. Mclouth was signed to a team friendly deal and was coming off a huge season so the deal was very unpopular. It turned out to be a shrewd move by the Buccos as Mclouth's production dropped off the table for the Braves and both Jeff Locke and Charlie Morton are still active Pirates. Also, the trade opened the door for that McCutchen guy.

I like cards like this as they can tell a lot of stories. This card back in the day would have been pretty decent money as both Bay and Perez were popular. Today this card cost me less than $20.

Posted by BobWalkthePlank at 3:01 PM