As a Pirates fan this one hurt way more than last year. This was by far the most complete team of the 3 year playoff run, but the Cardinals wizardry kept the Buccos in a win or go home scenario. For the most part I've tried to avoid reading/watching anything about the game. The Pirates won 98 games this year, so I don't need to read some hot take about what the team could have done differently.

You have to keep things in perspective when it comes to these games. The ins and outs of this game will be over analyzed, but when push comes to shove it is one game. By no means can you get a barometer of two teams in one game. The only thing that can be said with any certainty is that Jake Arrieta is very good and no team was going to beat him last night. Unfortunately this is a situation all too familiar to Pirate fans as Madison Bumgarner did the exact same thing last year. 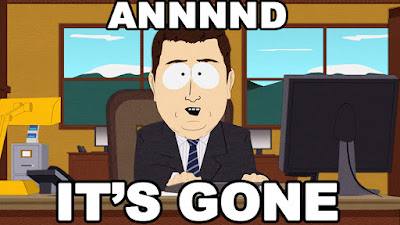 This pretty much sums up the cruelness of a Wild Card game.

The good thing is that the Pirates like the Cubs are set up for long term success. So this probably is just the beginning of what will become a fun three way rivalry between the Cards, Cubs and Buccos. All three have a great chance of being playoff teams next year.

To take my mind off the game my buddy and I came up with a cool game centered around cards that I'll share sometime in the next few days.

Thanks for reading!
Posted by BobWalkthePlank at 1:21 PM