One of the perks, albeit sometimes an expensive perk, is the ability to read other blogs to discover unique cards. I usually do a pretty good job reviewing checklists of newly released sets, but I still tend to miss quite a bit. So when something catches my eye on the blogs I usually jot myself a note to checkout the set in more detail.

Such was the case last year when Julie from A Cracked Bat opened a box of 2014 Panini Classics. The set peaked my interest early because it had one of the better checklists of the year featuring many pre-war players. When she was showing off the contents of the box she pulled one of the more unique Pirate cards I've seen the last couple of years and I knew I had to have it.

It was such a unique card that Julie planned on holding onto her copy so I went on the hunt.  A couple weeks back I finally tracked it down. 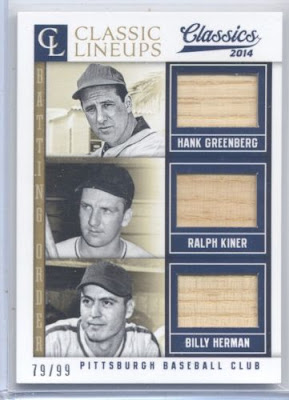 What makes this card so unique from the Pirates perspective is that both Greenberg and Herman only played the 1947 season for the Buccos. Ralph Kiner said on numerous occasions that his success as a power hitter was due to Greenberg taking him under his wing during that season. All 3 would eventually make the Hall of Fame. This may be the most unique combination of players featured on a relic card that I have in my collection.

It was fitting to show off a Kiner card as his birthday was yesterday.