Our Guy is Good Too

The Pirates and Cubs are set to square off tonight with both teams able to throw their best arms. Most of the build up for this game is centered around how Jake Arrieta has been lights out since the All Star break and that the Pirates have an uphill battle. The Pirates have already faced Arrieta a couple times in the past month and he was dominant. It is not the most pleasant scenario to be in, but this makes the third time we've played the Wild Card game in three years. I don't put much stock in playoff experience, but the facing a great pitcher in a one and done scenario is nothing new. We faced Johnny Cueto and Madison Bumgarner the last two seasons. If you like narrative, Cueto owned us his whole career and we were able to find a way.

As a Pirate fan my main hope is that our offense can put enough pressure on Arrieta to force Joe Maddon into tough decisions like I posed here. Most people commented that they would let the pitcher hit in these high leverage situations, but the Pirates and the Cubs are two of the more forward thinking teams out there. Plus, Joe Maddon has a tendency to do some outside the box type of moves. He once used 9 pitchers in a playoff game.

The other side of the coin is that Gerrit Cole is pitching for the Pirates and he is really good. While he is a notch below the big three of Kershaw, Grienke and Arrieta he is right there with the next wave. The Pirates got stuck having to pitch Cole before the wild card last year, but this year it was planned out that no matter what he will be available. I'm guessing the Cubs might be a small favorite, but essentially it will probably play as a coin flip.

My prediction is that one of the managers will be forced to remove their starter much earlier than expected to take advantage of a good offensive situation. Hopefully it is the Cubs! If we can get Arrieta out of the game in the 5th or 6th I like our chances. 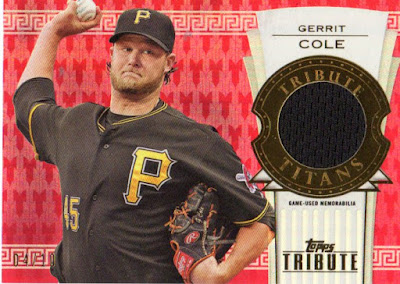 Surprisingly Cole cards haven't really taken off the way I thought they would. Whatever the reason it has allowed me to pick up some nice cards for low prices. This card cost around $10 shipped.