Today I'm heading out for the WVU/Deleware St football game. Obviously it is not a marquis opponent, but it is the last game before conference play starts so you hope you begin to develop some depth.  Our coach is on record in that he thinks power 5 conferences should play each other during non conference play.  Without looking I'm sure this game was added after the Mountaineers joined the Big 12 and needed to make new arrangements with their schedules.  Most non conference games are agreed 5-10 years in advance so that seems to make sense.

I only get around 6 games a year so no matter the opponent I'm going to show up and enjoy the game. Plus it is a nice excuse to have a beer and eat tailgate food. 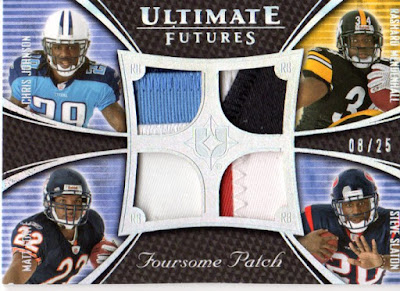 Man alive those Steve Slaton have a ton of cards. It will take me a lifetime to accumulate half of his releases because the year he was drafted (2008) was peak relic/auto time.  Both 2007 and 2008 NFL draft produced a ton of notable running backs so you got a lot of cards that looked like this 2008 Ultimate Collection patch.  This is why a lot of Slaton cards still hold value.

Let's Go Mountaineers
Posted by BobWalkthePlank at 9:15 AM