I recently completed my first ever trade with Brian from the Cutch-centric blog Collecting Cutch. It was a BIG trade.  He has already discussed the five cards I sent his way.

You probably remember Brian's old blog, Pirates Treasure Room.    Around the beginning of the year he decided to refocus his collection to where the majority of his effort would be devoted to Cutch. This opened to door for Brian and I to do some trading.

While obviously I like to collect the Pirate star myself, I'm by no means a super collector.  My Cutch collection is relatively large, but it has been dormant in terms of high end autos/relics since he became a bona fide superstar.  I enjoy variety too much to spend big dollars on one player.  I'm sure I can speak for Brian and that we miss the days a Cutch auto would cost  in the $5-10 range.

A few weeks back Brian sent an email with a list of Cutch cards I owned that he would be interested in trading for. He had six cards in mind and I ended up trading 5.  Because I knew Brian had an awesome Pirates collection I gave him free reign to build the return package.  I was not disappointed.

This post is only showing the Gerrit Cole portion of the trade package.  Brian sent a priority mail box full of great cards that I will showoff over time. He wasn't joking when he said he could give me a years worth of blogging material for the Cutch cards I sent his way. 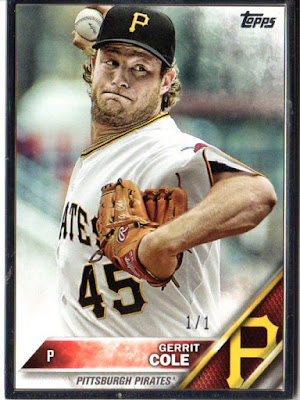 If you read my drivel on a somewhat regular basis you know that I love the framed Topps parallels. I found a decent amount of them when they were numbered to /20 and /16.  For some reason Topps decided to make them 1/1's which ultimately stopped my hunt.  Thanks to Brian I now can finally add a 1/1 silver frame to my collection. 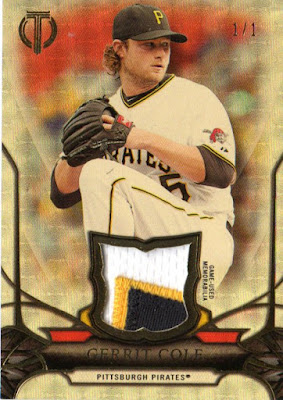 This was the WOW card of the return package.  Nice patch, high end set.....this card has it all. 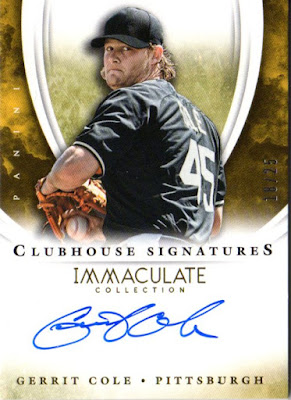 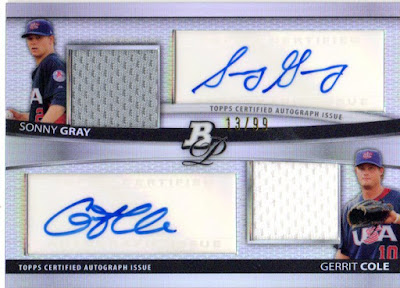 Last but not least is a dual auto from Platinum featuring another very good pitcher in Sonny Gray.  Lots of cool combos from this Bowman Platinum set.

This was such a fun trade Brian.  I'm glad we were able to break the ice.  In the coming months I'll continue to show off some of the cards you sent my way, but I wanted to make sure to show these Cole's right away.

Thanks for reading.
Posted by BobWalkthePlank at 7:33 PM