I've been away from home most of the weekend, but I wanted to showoff this bad boy. It is one of the nicest cards I've added in a long time. 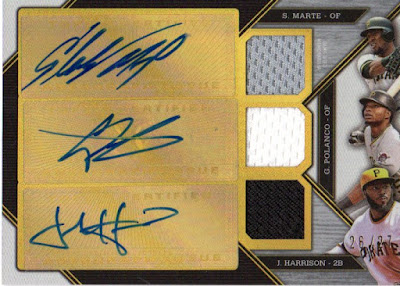 You don't often see triple autos that feature three every day players, but such is the case with this awesome Triple Threads card sent to me by my good pal Kevin of Card Papoy fame. He had told me to expect a high end direct delivery from eBay, but you don't really prepare for an awesome triple auto.

I have a bunch of cards from Kevin to showoff soon, but obviously you can see why this one needs a post all to its self.  Wow Kevin!!!!!!!!

Posted by BobWalkthePlank at 11:15 PM