Panini for all its faults has two really nice high end sets to cherry pick off of eBay. If you like on card autos or patches you will hard pressed to find better prices on the secondary market than National Treasures or Immaculate Collection.

Of course the big names will still carry good value, but if you are a team collector you can really find some great deals on mid level stars and rookies.  Lately I've been on a Tyler Glasnow kick and have been accumulating some nice cards, many of which fall under $5. 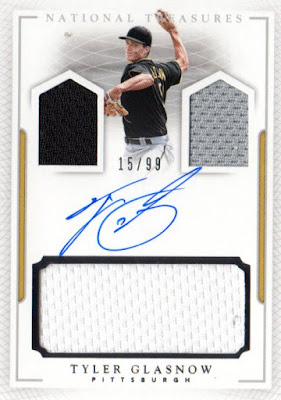 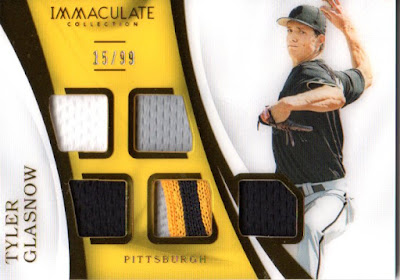 The auto was actually part of a lot that included a Jameson Taillon auto that only sold for around $7, and the multi patch card cost around $5. Glasnow is featured so much in this years Immaculate Collection that I basically just look at auctions that are close to ending and put low ball bids on all of them. Being that he was a pretty high end rookie at the beginning of the year means he has been featured in every set.  The market is saturated so cheap cards are going to fall through the cracks. While I don't win a ton, I would say I'm winning 3 cards a month for basically the price of pack of flagship each.

I suggest looking at the checklists of these sets and trying it out.  I'll think you will be surprised at how successful you can be.

Posted by BobWalkthePlank at 12:47 PM