Cards That Would Make my Head Explode

Being that it is Friday my mind begins to drift from work mode to things/activities that I actually like. Today the thought popped in my mind about what currently non existing card would blow my mind the most as a card collector.  I'm sure many of you have thought about this so I'll throw a few out. I consider these for the most part reasonably possible of happening.


- Bob Walk certified auto -  I'll put this first as I think the only real possibility would be in the Archives Fan Favorites auto subset. In theory it makes sense as Bob was a pretty beloved Pirate and has served as a longtime announcer after his playing days.  I would be contractually obligated to hoard as many as possible.


- Bob Walk new base card - Some possibilities exist here since he is still involved as an announcer.

- Mike "Spanky" Lavalliere certified auto (Pirates uniform) - He actually has one in the White Sox uniform which I do own.  Extra bonus if it is a nickname oriented set in which he signs it Spanky. 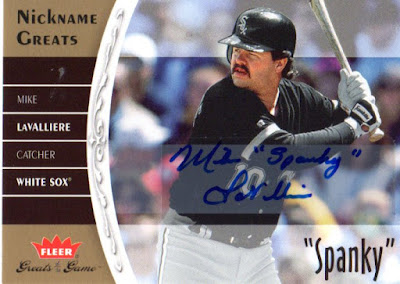 - Jay Bell certified auto - I'm actually surprised this one hasn't happened yet.  He played on all the good early 90's Pirate teams and won a World Series with the Dbacks.

- Bobby Bonilla certified auto - I'm sure the reason this one doesn't exist is more on the player than the company.  While Bonilla is not well liked, most of that hatred came after his Pirate days.

This list could be a whole lot longer if I included players still actively playing.  To keep things short his another short list of former Pirates that I'm disappointed to never receive a certified auto in the Bucco uniform.
- AJ Burnett
- Russell Martin
- Francisco Liriano

As you can see all three played huge roles in the Pirates becoming a respectable franchise again. For some reason none of them received a ton of cardboard love. I blame Henry Owens.

Posted by BobWalkthePlank at 4:19 PM